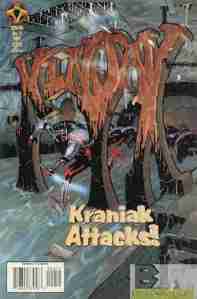 You knew there had to be a sewer level eventually.

Denny’s attempt to avoid the copywrite issues with Acclaim doesn’t go according to plan when his replacement costume disappears the next time he transforms to Ninjak. Meanwhile, Zeer forces Kraniac to get off his science-crazed butt (I think he has a butt–he’s really a giant head) and make a public display of defeating Ninjak. Kraniac has a plan to pull Ninjak into a modified version of his game level, only without the tools the game gives the player to win. Thanks to a malfunction a giant Ninjak, Kraniac, and his minions end up fighting in Times Square when they fall through the Jumbotron Kraniac was using to broadcast Ninjak’s “defeat”. Instead it’s Ninjak who defeats Kraniac. That’s the last of the Dark Dozen, but not Ninjak’s last problem. This is the last straw for Acclaim, who has the judge call in a Federal group called Inquest. (And if I followed the other Acclaim/Valiant comics I might know how much trouble Ninjak’s in right now.)

What they got right: Without the gifts of the game Denny/Ninjak has to figure out a different strategy to stop Kraniac. I like when the hero has to use his or her brain and not just brute force. And it was a decent fight. They also explain that when they are in the video game world and fall giant-sized into Time Square they become energy, which is why they aren’t falling through the ground when they land. Not sure how that works but it’s an explanation in a superhero comic replicating a fake video game. I can deal with it.

What they got wrong: A giant Ninjak just had a giant-sized fight with one of the villains in the game, and all Acclaim cares about is suing Ninjak for copywrite? Why aren’t they going after the Dark Dozen, or is that a plot point for later? If not, Acclaim look like idiots in a comic they published. That seems a bit weird to me.

Recommendation: I’m still really enjoying this series. You really should give this version a chance, although I understand why fans of the original hate the new version. It’s not like I haven’t done that with re-imaginings of my favorite characters.