Humans And Autobots Are Friends (or should be) 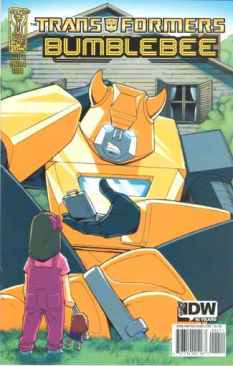 “How many blue crayons do you own?”

A half hour. Not even that.

Tonight I was going to review the fourth installment of Michael Bay’s Transformer movie, Age Of Extinction. Until The Last Knight hits theaters (and a movie that wants to sell itself to me by having Optimus Prime attack the Autobots is not doing a good job of it) it’s the only Transformers movie I have yet to see.

I didn’t even make it through the first half-hour of the FX Movies broadcast.

Why, you may ask? Well, it’s not like I didn’t know it was about humans treating Autobots as the bad guys. But there’s a scene in there that just made me realize it was dumber than that. I’m pretty sure I know where the story is headed because it’s been done before. But it’s also an extension of a problem I see in the adult-targeted side of the Transformers multiverse. See, I grew up at a time when the Autobots were allied with the humans. (Except in the comic but I’ll come back to that.) In the cartoon humans and Autobots joined forces against the Decepticons. The humans knew their own planet and energy sources while the Autobots protected them from the Decepticons. It was a good showing.

That’s hard to find now. Of the currently active series, the web series is set on Cybertron so we won’t count that, and four are on Earth; two of them are shows for kids and two of them, one a comic and the other a movie, are targeted for grown-ups and the heck with the target audience for the series. Yes, Hasbro throws a bone to the adult collectors but this started as a product for kids. Not 80s kids, but kids who are not yet adults. And apparently adults don’t like heroes or something.

Like I said, I knew what was coming in Age Of Extinction. Once again the humans want to exploit Cybertronian tech but kick out the Autobots. I wasn’t prepared for how stupid this was going to be. First of all, humanity is now fully-aware of the existence of the Transformers. The huge battle in Monument City wasn’t enough to alert them. The giant Decepticon in Shanghai was somehow explained away. The Fallen broadcasting a signal around the world to threaten humanity to give up Sam wasn’t even enough to arouse suspicion. But the fight in Chicago, the one that could have been avoided had the Autobots and NEST teamed up instead of the Autobots pretending to leave in order to save our sorry butts from our own bureaucratic morons, told everyone the Transformers exist. I wonder if they also know all of our technology came from reverse-engineering one of them (because we need aliens to give us advanced technology from the smartphone to Velcro–a rant for another time, perhaps), something they continued to attempt even after forming an alliance with the Autobots, and how many time the Autobots protected us from the Decepticons. I’m guessing no.

(Speaking of rants for another time, the entertainment industry does not know how to write heroic heroes anymore, and when they somehow figure it out, they still mess it up, and nobody cheers for heroes. There’s a Vietnam reference in there somewhere, but I’m not sure for which side of the debate. Maybe both.) “Humans should hate our protectors. Like the DC movies.” (Photo credit: Wikipedia)

Oh, but that’s not what set me off. I sat through obligatory d-bag, obligatory government man who hates the Transformers (although the scene with Kelsey Grammar happened after this scene), and the obligatory barely-legal hot chick. No, we have a scene where Ratchet, presumably one of the Autobots given sanctuary on Earth, being hunted by a military group run by the CIA (just in case you thought RATT in the Marvel books being run by the US government’s propaganda group wasn’t dumb enough–sorry, Bob, but it’s true) which includes Lockdown, who is traditionally a DECEPTICON!!!!!!!, working with the group, including someone who is mad at the AUTOBOT because his sister died in the Chicago incident. I know what’s going to happen because it’s the same thing that LED to the Chicago incident. Humans chase off Autobots, Decepticons attack, Autobots save the ungrateful human jackasses, everyone is friends until the next movie when they aren’t again. Lather, rinse, repeat! I could be wrong but I bet I’m not.

It’s an annoying trend in Transformers media lately. When I was a kid there were two Transformers continuities. One was the cartoon, where the grateful human race (with one or two exceptions but they were evil) volunteered to help the Autobots stop the Decepticons from decimating Earth. The other was the Marvel comic, where humans feared both sides…and frankly that was Optimus Prime’s fault. (Yeah, I keep hearing how “perfect” Optimus is supposed to be in the G1 days, but I don’t see it.) It was Jazz, while Optimus was still a head in Shockwave’s display case, who made friends with G.B. Blackrock, a really good ally for the Autobots to have, and Prowl who actually worked with him. As soon as Op was back, he was gone aside from a couple of occasions early on. Also gone where the Witwickys, whom they chased off but the only times they sought their help was after they screwed things up. And Optimus never attempted to find other allies among the humans. Megatron made sure of that, but he didn’t have to damage the Autobots reputations with any real difficulty thanks to Optimus’ own action.

Yes, I know the UK story where the Autobots tried to make contact with the President and Megatron messed that up somehow, but he never tried again? Even after the alliance with G.I. Joe against the Decepticons the government didn’t trust the Autobots. Or return to their base in force with RATT so that crossover only served to give Bumblebee a new body and name on the Transformers front. This is typical for the comics, however.

Compare this and Michael Bay’s take on humans/Autobots relations to the TV shows set on human-time Earth (meaning not the Beast shows or the current Combiner Wars webseries):

This is why I prefer kids shows. The humans and Autobots work together instead of against each other, and focus their attention on the real bad guys, the Decepticons. I like my heroes to be treated like heroes. Maybe someday the adults will get to have heroes too. Until then, kids shows are still better. They get to see how heroes should be treated…and hopefully how to choose the right heroes.

Oh right, G.I. Joe Vs. The Transformers. Tim Seeley’s two miniseries were my favorite of the crossover, even with Bumblebee’s death, although the others were pretty good too. Plus Eject and Firewall were the best friends ever. Sorry, Miko and Bulkhead, but they didn’t annoy me.