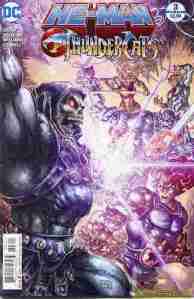 Sadly, we don’t get Panthor versus Panthro. Probably to avoid confusion and typos.

The Thundercats attack Skeletor, who now has the powers of He-Man and Mumm-Ra in addition to their own. At best the Thundercats hold their own, until Skeletor just blurts out that he has Mumm-Ra’s powers (which he had been dropping hints of through most of the fight, so he’s bad at keeping secrets). Lion-O knows Mumm-Ra’s one weakness, the evil of his own reflection, which he uses on Skeletor. As the merged villains flee, Lion-O reclaims the Sword Of Power and returns it to Prince Adam…only to be in time for Adam’s funeral! As the Sorceress (as Zoar) watches on, the Ancient Spirits Of Evil, now under the combined control of the still merged Mumm-Ra and Skeletor, attacks the royal palace.

What they got right: Good on the writers for mentioning Jaga, indicating that he told Lion-O about Skeletor and the Power Sword. The fight between the Thundercats and the triple-powered Skeletor was really cool, whatever I think of Skeletor obtaining the power of He-Man…which he thankfully loses when Mumm-Ra and Skeletor start fighting for control, switching between bodies Ranma-style. Even Snarf gets to be awesome. There’s also a nice moment as Randor talks to Lion-O about following in a father’s footsteps. Randor’s really getting a good mourning moment here.

What they got wrong: Yes, we know (or at least I hope) they’re not killing Adam off and somehow the power of Grayskull will bring him back to life, but I still don’t like the idea of dead Adam, no matter how well the moment is done, which I’ll admit it is well done.

Recommendation: I will also admit that this issue makes up for the problems I had last issue. It’s back on the tentative recommendation list.