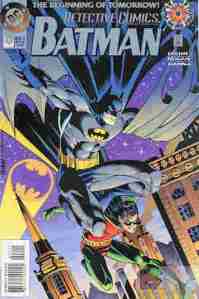 Robin shows up once in this comic, but in flashback with a different Robin.

The history of Batman continues: This time the focus is on how Batman acquired his gear. Meanwhile, in modern times he fights a bunch of hoodlums trying to reach a pair of kidnapped children.

What they got right: Don’t get me wrong. Learning how Batman got his bat-gear and Batmobile is cool and all.

What they got wrong: But it’s the details that gets me. Bruce actually stopped a potential SWAT vehicle design that would benefit the police just to have his Batmobile? I don’t even mind cancelling military contracts if it was because he just had a problem making weapons and stuff anymore. It worked for Tony Stark. But this kind of makes one of the critiques against Batman kind of come to pass. He even faked a theft, although you’d think Lucius at least would recognize the Batmobile as the design he was showing Bruce some time before he cancelled all police and military contracts. Also, the format of these three origin issues we’ve looked at thus far is disjointed to read since they’re hoping back and forth to periods in Batman’s history. Separately they work because they go straight through, but may splitting the origins between the issues would have been a better idea. It’s not like they haven’t spread a story arc through multiple Bat-titles before.

Recommendation: This one is a bit harder to recommend. It really doesn’t do much for Batman’s reputation as a sane person or negate critique that he could use his fortune to better the police when we see him deny the police was already intended for them so he could have the gear someone else designed. Best to skip this one I think.