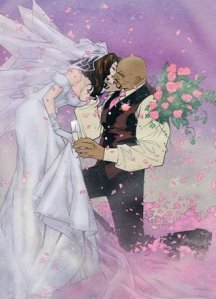 A little preview for you MCU Netflix viewers, if they keep on track.

Back in 2009 I wrote a commentary about how interracial marriage or even just relationships are treated by the storytelling world, and it was not a show of applause. Sure you have Luke Cage and Jessica Jones up there, but given comics’ approach to marriage as a whole these days I still see the ticking clock. (Right Peter Parker, Storm and Black Panther, Oliver Queen and Black Canary, and a whole host of others? Clark and Lois had to fight to keep their marriage while the Richards clan are the only ones who have somehow kept their marriage strong…Civil War not withstanding because that event ruins everything. And who’s surprised the Batman/Catwoman wedding didn’t happen despite the build-up?) Cloak and Dagger have had an on again-off again romance based on their circumstances at any one time while their TV counterparts can’t even high-five each other without flying like Jazz on Fresh Prince Of Bel-Air.

Even Star Trek, a franchise that takes place in a time when racism is thankfully dead, has had plenty of interspecies relationships but only two even close interracial encounters, one in progress on Discovery and the other in the original series that deserves an asterisk by modern standards (it was a barrier breaker at the time mind you) because it was a forced kiss and I have yet to see a black person and white person or any other mixed Earth racial make-up kiss each other since. Then again both Voyager and Enterprise lost my interest and I only know Discovery through SF Debris reviews because even if I had money coming in I wouldn’t waste it on CBS All Access even if the pilot had wowed me. Apparently you’re only allowed to kiss a different color if it would only work in space or Equestria Girls.

And while Hollywood fails us again, their advertisers haven’t. You know, those 30 second skits you guys fast forward past because you can’t handle a break from the story. (I on the other hand gained some of my storytelling skills from those breaks as I tried to figure out how He-Man would survive a 50 foot drop without wings.) While the movie studios continue to have gay relationships treated as normal (I don’t care what you’re views on homosexuality or gay marriage are–agree or disagree you have to admit it’s been a huge part of normalizing such things with the general public) on the rare occasion you see an interracial couple, especially a white person and a black person, the story usually revolves around shock and at best reluctant acceptance. I think The Loud House gets away with it because they’re gay but I don’t watch the show. And I’m not commenting on Hollywood’s acceptance of gay relations, just asking them to treat interracial romances the same way. Again, like their advertisers.

Tonight I want to look at a surprising trend among the commercials to willingly feature interracial couples, usually black and white but if I find one with a white and Latino or something you’ll see it here, and actually think this will sell their product. And our first one drew out all the racists because let’s be honest, luring out diehard racists is easier than calling a well-trained dog. Or possibly a rat for a proper analog.

My favorite line in the comments to this video is “THIS IS SO CONTROVERSIAL. PUTTING CEREAL ON YOUR DAD ISNT LOVE. DO YOU WANT ANTS CAUSE THATS HOW YOU GET THEM”. I have a weird sense of humor. I think this is the first time I’ve seen an interracial couple in anything where there was no discussion of their race, or disapproving family and friends, or any of that. They’re…just a couple; a man and a woman who fell in love, got married, and had a cute little girl. And yet the racists came out of the woodwork to throw a fit, demanding the ad get pulled down. Cheerios and their ad creators not only didn’t listen to them, they doubled down.

And by double down I mean a second kid, who will also be half white and half black. And all that comes with that…which is simply a lighter skin tone and not much else. Heck, the first time I even saw an interracial kid on TV that was just a kid was this ad, and I’ll be 45 by the end of next week. So either I don’t watch as much as I think or someone has not been on the ball. But this video made me feel better about it. Stupidity (or this form at least) is escaping the next generation.

I love how they didn’t even put it together until the host pointed it out and they all found the very concept stupid. That did my heart more good than the Cheerios. Which I actually had for breakfast today because I’ve loved them since I was a kid myself. Cheerios’s VP (in case you didn’t watch the reaction video) chose an interracial couple because one in ten couples are of mixed race. You wouldn’t know it by the actual shows. And apparently other advertising campaigns also saw the opportunity to increase their market by ignoring which crayon God used on which person.

I liked Old Navy before this and I like them more now. Seriously, they sell good clothes. Oh, and claiming Old Navy did this simply to drum up knowledge of their sale by being “controversial” and not actually caring? Really? Maybe they just don’t care what color they’re looking at. Unless it’s green, and we’re not back to Star Trek. Then there’s this ad:

As a Crohn’s sufferer I’m glad I’m not so bad that I have to go back to my gastroenterologist every few weeks for an injection. I just had to get sick and lose part of my colon to get remission. Come to think of it I’m not convinced I came out ahead. I miss my bellybutton. I think I also saw this girl in a Consumer Celluar ad with her white grandparents. I don’t think this one has the controversy of the two above so maybe things are finally regulating…

It’s my fault. I keep making the mistake of getting up in the morning. A man lifted his daughter up to make her own order for cupcakes? What a racist thing to do? What? Man, kids are smarter than you. Oh, I know he’s going to hate this one and I apologize to those on slower connections (my upload speed is terrible) but I have to end on this now.

Thankfully we are sparred seeing that guy in a speedo! This one is from Tide’s official YouTube posting and the comments are down. Either they’re sick of hearing about the over-exaggerated “Pods Challenge” controversy or the racists still haven’t gone away. I wish I was convinced it was the former.

UPDATE: 8/11/2020: Maybe that’s why they took it down, which is sad because we need more positive depictions of interracial families, not less.

The reason I’m bringing all this up is that Hollywood still wants to do the “interracial controversial” thing in every story (when they even have an interracial coupling), with no writer, director, or casting agent having the guts to simply have a couple of different races and not bring up that they’re different races. Yet here are four advertising campaigns where they’re just a loving family of husband, wife, and kids happily being a family and doing family stuff together who just happen to be a mix of colors. I want to see more relationships on TV like that. But here we are, a couple of years removed from a biracial president (who we were only told was black) and still we act like a shade of melanin affected only by the region of this planet their ancestors grew up in as a means for survival matters in the cosmic scheme of things. I still stick with my little world where the race war is over and humans win. Or did you think Dr. King’s dream wouldn’t lead to us marrying people with other skin colors and eye shapes?