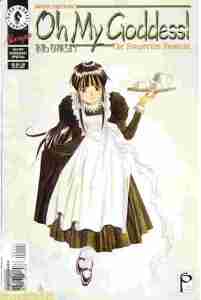 Come on, cover, give me something to work with here.

Belldandy and Urd join Keiichi and his motorcycle club on a trip to a mountain resort his grandfather once stayed at. They’re there to train for endurance for their races, but Keiichi get waylaid when the housekeeper and sole occupant, Chieko, recognizes him…as his grandfather. Chieko is actually a Shinnentai, a manifestation of will that, unlike a ghost, can assume a fully physical form and even casts a reflection. The real Cheiko died before Kei’s grandfather could fulfill a promise, the two apparently becoming close in a short amount of time. The promise was that Hotaru (that was grandpa’s name) would take her once around the lake, but he couldn’t repair it before she passed and it was left behind, a promise unfulfilled. Keiichi suffers days (as the club is now upset that both Belldandy and this new girl like him…because they’re jerks) and nights fixing the motorcycle. Repaired, Keiichi fulfills his granddad’s promise and she fulfills hers, “once around the lake and I’ll give you a kiss” before she disappears. Despite being a popular British motorcycle, Keiichi doesn’t feel like the promise was truly fulfilled and leaves it there at the manor.

What they got right: This made me tear up, dang it! That’s the odd thing about this series, which some of you may know as Ah My Goddess, which is how the title is translated nowadays for some reason, except by Dark Horse. (Apparently there’s a debate, but Fujishima prefers Oh and frankly the pun works better that way so that’s what I prefer.) It’s not something you’d think I’d be into, but when a friend of mine showed me the anime I was really invested in these characters and this strange world of Goddesses who run a help line. Fujishima’s love of motorcycles is apparent by picking a particular bike that’s a legend in Japan, a Brough Superior model SS100AGS. I know nothing about motorcycles, and either the author or one of the publishers were nice enough to add a brief history of the actual cycle and why it mattered to a Japanese motorcycle enthusiast like Keiichi.

What they got wrong: I’ve never liked the motorcycle club characters. They’re overmacho jerks who are just there to keep Keiichi humble since he’s being courted by a Goddess, but Urd (who keeps trying to get Keiichi and Belldandy together) and Skuld (who keeps trying to separate them so Belldandy will return to Heaven) do that just fine. And although Skuld deserves a scolding for some of her antics, she doesn’t make me want to punch her repeatedly in the face like Tamiya and Otaki do every time those “boys” open their pie holes! At least Otaki had the parts Kei needed, but getting mad because a beautiful woman likes Kei while they couldn’t get a decent girl if they paid by the hour makes them very unlikable.

Recommendation: I enjoy this series more than I thought I would, although I didn’t get into the manga long term. I do recommend it for fans of the Japanese romantic comedy genre and we’ll see a few more issues in the next few weeks.