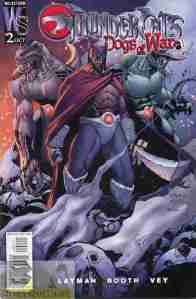 Drink in the blandness, cubs. Just…drink it in.

You know, I wasn’t expecting to break format with this series but the stupidity, lameness, and one more shot at my childhood needs to be examined here. Look at the War Dog design (that’s our Doberlord by the way) on the cover along with their Lizaurian warrior slaves. Oh, enjoy that name–Lizaurian–because that the closest thing to an imagination this book is going to show. For example we get the name of the guard that has a crush on Wilykit, and his name is Bobcat. Then you have the aforementioned War Dog design. It’s both cool and sad. Cool as far as anthropomorphic designs go and a bit threatening. However, compare it to the Thundarians, a better fusion of feline and humanoid designs. This is dogs with a humanoid shape. And this book I’m waiting to see them play poker given the level of effort in the titles.

Then the story happens. The Berbils, who moved here from Third Earth for some reason decide to surrender because they wouldn’t be decent fighters until the recent remake that skirts the line between reboot and re-imagining just enough that I was able to enjoy it, but that’s for another time. Doberlord sends the Lizaurians to kill them, and says “bitchin'” as they do it. Yes, the cute characters are now shock deaths because we’re dark and edgy and don’t do cute anymore. Layman specifically brought the Berbils from Third Earth to Thundera just to kill them. That was stupid and pointless and another strike on my childhood. And no, showing us Linx-O and Pumyra still alive (apparently Bengali is still dead) will not make up for this. You had NO reason for them to be here but you did so anyway just to shock death the cute characters…and the Thundercats don’t even seem to be aware of it. Jerk move, John. Jerk…move. Oh, and his wife possibly kills a general for questioning the use of the Lizaurians instead of letting the War Dogs play with him and wanted a Berbil as a souvenir. She’s also a Labrador named Lady Dialador and she’s a bitch…and I don’t mean she’s pregnant. Weak.

Anyway, Wilykit and the new Thunderkittens are trying to get back into the palace when the War Dogs, trying to keep anyone from entering or leaving the palace, prepare to them. Until our unimaginatively named Bobcat shows up and joins the fight, winning Wilykit’s gratitude. I’m sorry, but I can’t get over how little effort was put into his name. Look at the other names. Bobaraus…would have been too close to Barabbas or barbarian I grant you, but is still more effort in five seconds than Layman took in two issues to name this guy. Well, they get into the palace and Wilykit learns her brother isn’t so dead. Happy sibling reunion…off panel! Tygra, Cheetara, and Lion-O (you know, the ones with creative names) get a tearful reunion with Wilykat. HIS OWN SISTER gets hers off panel!

Lion-O meanwhile is talking with Pumyra about the situation over the communicator (because she and Lynx-O are taking care of injured elsewhere) when Doberlord breaks in to tell the Thundercats that he’s been saving the palace for last and that they should surrender. Lion-O’s solution? Send Snarf somehow out to get the only person who can help…Mumm-Ra! You know, I usually like a “hero and villain must team up” story but…after what Mumm-Ra did to them fifteen years ago how was this even an option Lion-O immediately went for without Mumm-Ra himself talking him into it for the good of Thundera? And where has he been for 15 years? What the hell?

I hope breaking format isn’t going to be a trend here, but this glorified bad fanfic is just crap enough that I doubt I’m getting away with that. You on the other hand, should stay away. And I say this as someone trying to figure out how to lighten my collection, so you know I’m serious. I wonder if I can send this and The Return to Linkara for Atop The Fourth Wall?