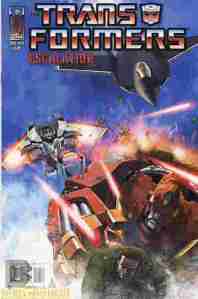 “Hey, I won that carnival game fair and square. The terrorist plushie is mine!”

Ratchet manages to rescue Jimmy and Verity but an explosion appears to have taken out Ironhide. In Brasnia, Megatron is taking on the rest of the Autobots, unaware that Optimus Prime managed to transfer his consciousness to his trailer unit, only appearing dead. Megatron also doesn’t know that Ore-13 has a side effect that is painful. Megatron manages to escape but not before Skywarp and Thundercracker manage to stop Hot Rod from escaping with an intact facsimile. Now Megatron has called in Sixshot, and the Reapers are right behind him. (Yeah, I should have reviewed some of the important Spotlight comics before this. My collection of the IDW run is a bit of a mess. I used to have it in a sort of chronological order.) Meanwhile, Skywatch continues their excavation and have Ravage and Buzzsaw chained like animals, while Hunter meets the head of the Machination.

What they got right: The finale is satisfying and the art is really good.

What they got wrong: Furman is continuing his multiple plotline problem.

Recommendation: As a whole this miniseries was a mix of hits and misses, but overall decent. It’s worth seeing for the early days of the IDW TFU. But I do need to go back and check out a few Spotlight specials before we move on to Devastation.