“Yesterday’s” Comic> The Phantom: The Ghost Who Walks #3 (Marvel) 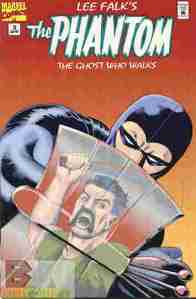 The Phantom: The Ghost Who Walks Book 3

I don’t know what happened in issue #3, but issue three opens with Mars finding the Skull Cave (I think; there’s some inconsistency continuity-wise)to learn both the Phantom and Katherine are still alive. But he manages to kill off the hill tribe leaders while the Phantom is attacked by a leopard while showing Katherine a secret underground city that would be destroyed by the mining. She’s accused of being involved, but the Phantom now worries if he can stop the mining conspiracy. Pushed onward by the spirit of his father (presumably the 21st Phantom because the book never really says) the Phantom confronts Mars and General Bababu directly, exposing the latter as the “Butcher Of Bangala” and defeating the former in combat. Later in New York, Katherine meets up with Christopher Walker again…who bears an interesting skull-shaped ring.

What they got right: I do like the new take on the Phantom and his costume is a good upgrade, as would befit a Phantom who grew up in modern times. Plus we have a potential interracial romance, which hasn’t been seen before. How that would affect the next Phantom I couldn’t tell you, but it’s something to explore.

What they got wrong: So was this for people who knew nothing of the newspaper strip that was still popular enough to get this made? Maybe it was because Marvel had the license for the Phantom: 2040 license that they decided to make this one as well? There are some big continuity questions that are brought up here.

Recommendation: A good story (the two of three issues I have) that’s worth giving a look, even for fans of the usual 21st Phantom. Next week we get into the aforementioned futuristic Phantom cartoon tie-in comic.

Posted by ShadowWing Tronix on August 18, 2017 in Yesterday's Comics and tagged Marvel Comics, The Phantom.