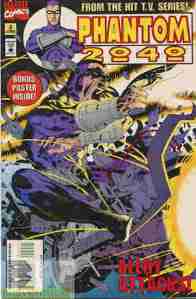 Kit has a nightmare about being left alone, bringing up feelings he had a child when his father disappeared and…we don’t really know what happened to his mother, do we? People with stronger memories of the show, please tell me if I’m wrong. Anyway, Guran (who is wondering if it was right to bring Kit into this life after all) goes to see Heloise but is attacked by Alloy, who uses fractal biot technology to enhance his arms. The Phantom goes to rescue Guran and defeats Alloy, both Kit and Guran facing their personal conflicts.

What they got right: Conceptually I like the story. A mercenary who uses the shapeshifting abilities of a fractal biot would make for a good enemy, plus Kit and Guran’s concerns make for a good subplot.

What they got wrong: But I think the writer is making his own series rather than following the show. This is still Kit’s early days as the Phantom from all indications, yet if memory serves fractal biots were still experimental enough that Kit couldn’t be studying them that early. Also there was only one fractal biot that I remember because there was a flaw in that it needed its brain externalized to fully realize its shapeshifting abilities. This story acts like Rebecca already has an army of them among her regular biots. Also, in the show Heloise and Guran already met as she tried to talk him out of bringing her nephew into the family legacy out of fear of what happened to her brother. Her motivations are still here but that’s the only real carry-over from the show that worked.

Recommendation: It’s not a bad story but it really fails to properly connect to the show meaningfully and this was a great show. That’s a huge loss but unattached from the show you might enjoy it. I still recommend the show more though.