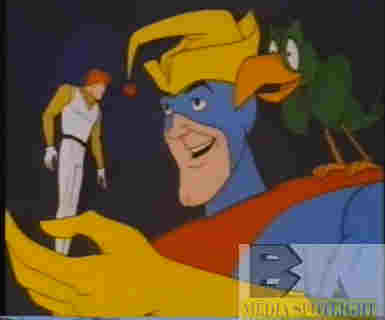 While looking into old cartoons on YouTube I’d heard of but never watched I stumbled upon something I hadn’t heard of before, and I consider myself pretty knowledgeable on Filmation TV shows. The post I’m embedding from as of this intro’s writing debuted on YT in 2010 but I don’t know when this was located or how. So I’m guessing many of you out there still haven’t heard of Dick Digit.

The show had to have been created in the 1960s or 1970s since it has the look of cartoons from that time as well as some of their stock voice actors of the time. While Filmation is mostly known for their licensed work their original ideas are seldom acknowledged, which is too bad. As I’ve chronicled here at the Spotlight they were capable of coming up with their own superheroes, from Space Sentinels to the Super 7 to Hero High. Then there are their live-action shows, which never get mentioned. So how well would Dick Digit, the Jester, and Macaw the bird have fared alongside these forgotten champions of justice?

Personally I like the idea. You don’t see many crimefighting clowns in fiction, and the Jester is pretty fun. I wonder what Dick Digit’s real name was back on his home planet, and if he gained any superpowers like DC’s the Atom (who also had a cartoon by Filmation as part of Justice League Of America)? I’m kind of sorry this show didn’t get made. The aliens were unique and so was the origin. The Jester can alter his appearance but we don’t know if he has superpowers or just gimmicks and costumes or makeup. There’s a lot of potential here by 1960s standards. Could it work in our more cynical era? Well, if The Orville can make the hit it has anything’s possible.