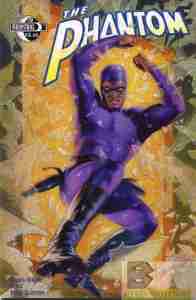 “Funny, I’ve never seen an aquarium explode like that.”

A church in Kansas City meant well. Taking up a collection they planned to buy back Christian slaves in Il Guarev, Africa, sending a woman to make the purchases. The Phantom is seeking a few slaves of his own, citizens and an ambassador from Bangala. There also two BBC reporters watching as the buyers arrive. The woman, Kathy Prebble, doesn’t realize she needs to pay up front because slavers don’t trust checks. An “Arab” pays for her purchase as well as for her, but the gold is fake, while the Phantom is real. He takes the people to a train to take them home, but the bad guys have learned of the deception and they’re coming.

What they got right: One of the strengths of the Moonstone run of the Phantom was how it played on current problems in Africa and occasionally elsewhere for their stories, trying to get the message out about some of those problems to people who didn’t know about them. Here it’s conflict diamonds (diamonds mined by slaves and used to fund drug and other criminal operations) and modern slavery. While I don’t know for sure that tribes use slavery simply to keep down rival tribes as well as Coptic Christians but I wouldn’t be surprised if it didn’t.

What they got wrong: “So, you are a real hero.” “No, that’s my horse.” Really, Kit? She’s not going to get that pun and it’s kind of groanworthy for at least one of us that do. Namely me.

Recommendation: A good start to this two-part story and worth checking out.

Posted by ShadowWing Tronix on September 29, 2017 in Yesterday's Comics and tagged Moonstone Books, The Phantom.