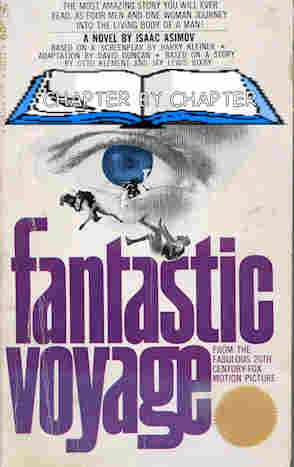 Note that there will be spoilers for the movie as well, not only to denote any changes I notice but because we’re reviewing the novelization of the movie of course things will be revealed from the movie. It’s time to read our first chapter, and unlike last time this should only take this one article. What a novel idea…no pun intended.

I will say that the back of the book spells out every danger (minus the villain) that our heroes are going to be dealing with. The chapters are of a decent length, maybe around 12 pages per chapter, so there should be quite a bit to discuss. If you guys have this novel, feel free to comment, but as the intro says, don’t ruin anything for later chapters. I’ve finally seen the movie but I haven’t read the book. And now I have the Henry’s Cat theme song in my head. So let’s get on with this.

The movie started with the plane landing, no showing how Agent Grant got Benes out of The Other Side’s country. “We” and “Them” (both capitalized) were used, signifying the veiled illusion to the Cold War that was going on when the movie came out. There’s really little that happens on the plane or with the plane…so this chapter really had nothing to do with the plane outside of noting what kind it is. Instead, Asimov uses this to introduce the CMDF members important to the story. And it does so without the big reveal that anybody who has heard of Fantastic Voyage already knows but back then it was a major secret. Remember, this is the movie that led to the “shrink down into someone’s body to save their life” trope.

Instead of trying to introduce the characters and their personalities (except for the agent who helped Benes escape to defect) during the story, Asimov takes time to go over them here, while vaguely referencing that Benes’ arrival is a big deal. And each of the characters react in their own way. The two guys in charge (who do almost nothing in the story otherwise) are General Alan Carter and Colonel Donald Reid, although Asimov tells us that the ranks are only for convenience. This is a government operation but not military. In fact Reid seems upset that the military will get their hands on what Benes’ is offering, while Carter is just worried agents from the Other Side are going to stop Benes from ever getting to them.

Reid goes to see Donald Pleasence’s, character, Dr. Michaels, who oddly doesn’t appear to have a first name. He’s the expert in the blood veins, mapping them like roadways or waterways. He is actually wondering if Benes can really do what he says, and suggests he’s either wrong or lying so that they’ll help him defect. Since he spends so much of the story trying to get everyone to abandon the mission this is very much in keeping with his character, especially given what we learn about him later on. And now I have to be vague.

Dr. Peter Laurence Duval (that’s what happened to Dr. Michaels’ first name) and his assistant, Carol Peterson, are introduced together, like Carter and Reid. All we really learn about Duval is that he’s as upset as Reid that the military is going to get to Benes’ gift first and believes the military is going to hog it all, and that he’s a man married to his work. Carol is twenty years younger, in charge of maintaining the laser (setting up her point in the mission of this book), and she is drawn to Duval. However, like the movie, it falls more into “hero worship” than romantic interest. In fact, Carol in the movie wasn’t a love interest in the movie, which is something I hope to see in the book as well. We do, however, get the usual cliché about her wanting “wolf calls” for her brain instead of her body…which is rather difficult when you’re being played by Rachel Welch, but I digress. She’s not the cold fish lady scientists usually get depicted as, but nothing like this is brought up for any of the men, although granted only two of our male cast are on the usual “sexy” meter, but I don’t know why it was brought up here at all. It’s been a couple of months since I watched the movie, but I don’t remember being annoyed with being hot was part of her character.

Our last subject (Grant, our final main character, is only namedropped as at this point he’s the one bringing Benes to not-the-United States) is Owens. In the movie Owens just popped up when they needed the submarine and is probably the least developed character in the movie. Here Asimov tries to work around that by having Owens know who Benes is (having met him during a trip to not-the-Soviet Union for some unnamed gathering) and is part of the group meeting the plane at the airport. He also mentions designing the sub, which will be important later, and that during the trip he and Benes had gone drinking, with his traveling companion asking if he or Benes said something they shouldn’t, which Asimov uses as a chance to play up how things were in the USSR when it came to their people hanging out with visitors from the US. It’s more than Owens gets in the movie.

By the way, none of this shows up in the movie. We learn about Duval and Michaels’ differing views on religion or Grant and Carol’s history (in general, not with each other) through “downtime dialog”, while Owens spent most of the time in the bubble controlling the ship so he never really got to interact with anyone. If anything, Owens is helped as a character via this chapter, while we learn about the rest through the story anyway, and Asimov has to jump through hoops not to mention miniaturization (what spoiler, this is Fantastic Voyage as being discussed in 2017–who doesn’t know that part?) while still introducing us to the characters, which could have been done later, but judging by this first chapter it’s still a good introduction. It’s an addition that only needed to be there to give Owens a chance to actually have some character and not much else that wasn’t done later, but it’s not a bad addition.

Look, we’re done in one article! Join us next week as the book finally catches up to the movie. I think.