Continuing my look through my favorite entries to the recently concluded Friday Night Fights. Click here for part 1. So far I’ve looked at the first two tournaments I took part in. Everybody had their own reasons for choosing the fights they did. I liked to look for the unusual ones, sometimes fights that didn’t feature the usual fists and lasers. And I avoided ones that led to one character dying as well as ones that made the heroes look heroic and the villains look like chumps who at least offered a challenge. They could be silly or serious but I tried for as fun a fight as I could given the theme. And with that let’s see the next wave of fights I thought were the best I offered up to the Spacebooger brackets. 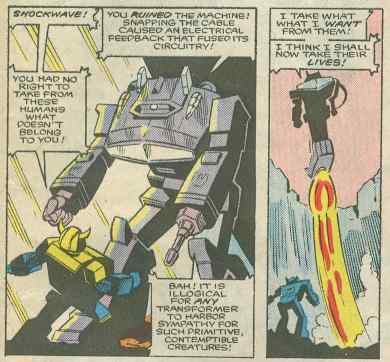 Shockwave Takes In A Concert (The Transformers #14/G7, Fight Music)

G7’s theme, taken from a scene in some movie I don’t remember (I think Chris Farley was in it), was about fights based around music. And for some reason I did the articles like a bad Wolfman Jack parody, which I thankfully dropped after this entry. In this case Bumblebee and some newly-awakened Autobots try to stop the Decepticons from ruining a rock concert by not-Bruce Springsteen and not the E-Street Band. It makes more sense in context.

Before Vanilla Ice was renovating Florida mini-mansions on television he was a rap artist. We’re still not sure why but that’s the 90s problem. I’m an 80s kid. He also did the fight scene in Teenage Mutant Ninja Turtles 2: The Secret Of The Ooze. You couldn’t get more musical than that. I even included a clip of the scene. Which is now blocked in America by Warner Brothers Entertainment. Who didn’t make the movie or the soundtrack, so what the heck, WB?

This one is on the list for the set-up more than the fight itself. Taken from an episode of the cartoon, the gang tries to steal energy from the enemy and the humans that work for them by throwing a rock concert. It’s the rare occasion where a white man can get away with writing “house Negro” in the 2000s as a joke and only have the people who get angry at anything complain because they don’t realize how the term fits people willingly being slave for aliens in a Japanese cartoon translated into English and mashed with two other Japanese cartoons. And no, I don’t consider that a badge of honor or anything.

I will however get flack from anime purists and animation snobs because I called it a cartoon. 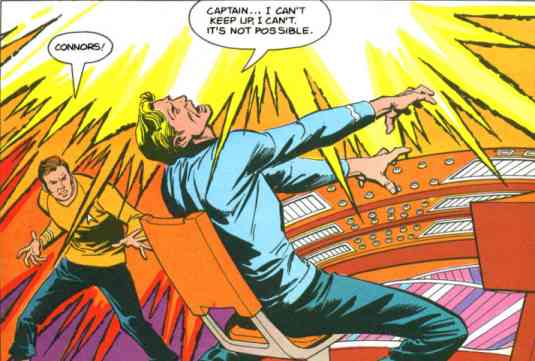 Remember when I said I like to use the occasional unusual fight? Well, here’s a navigator who isn’t Chekov or Arex dealing with a being of pure sound that’s driving everyone crazy using a crazy space piano. Actually, he’s going for understanding over fighting but it still works for me.

When the rule was “every fight had to be three panels max and end with a kick it ruined any chance of using Shockwave in Friday Night Fights for the the first since I joined. So Shockwave opted to “join me” in hosting duties, which is what led to that comic appearing in the final fight of the tournament–which I missed because I was sick. The fight itself wasn’t that great but I really liked the idea. If I had not gotten sick before the final round and ruined the whole gag it would have been fun. It’s also the closest I’ve come to having a storyline involving myself unlike some of my video reviewer pals.

Kicking In The Knight (Spider-Man & Batman: Disordered Minds/Feet Of Fury round 2)

It’s not surprising that one of my favorite fights comes from my favorite crossover, which I would later review as a Scanning My Collection article. I think it’s my fault the rules were altered to having the fights consistent, but which of the three panels would YOU end on? Also, I think this is the first time I actually won a round in the Friday Night Fights. 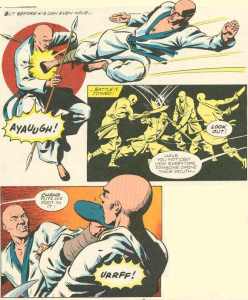 Sure he stopped me from using K9, my favorite TARDIS Companion, in a Friday Night Fight, but Chang earned my respect, not my wrath. Even Shockwave couldn’t deny it, although he wouldn’t admit to it either. 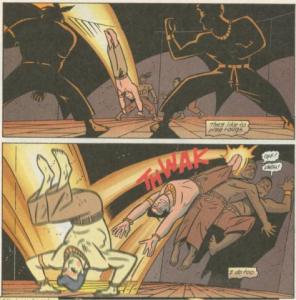 Dancing On His Face (The Batman Adventures: The Lost Years #3/Feet Of Fury round 9)

By itself it’s okay, but within the tourney rules it was a different way to place a kick. As for the Shockwave fanart used, sadly the site he linked to in the comments is down, but there is a link in his name that goes to his LEGO fancomic, Space: The Comic. Which I assume if Gary from Crisis On Earth Prime isn’t already aware of he’s probably over there now.

Remember when I also said I liked to see the heroes win? Well, this tournament was about using fights where the villains win. They can win a fight as long as the heroes win the big fight at the end of the story, and I have to admit that the future Atlas’ battle with the future War Machine was a great fight.

I do however like watching villains fight each other, and Shockwave’s fight with Megatron was a spectacle. While Shockwave is the various cartoons is usually a, as Shocky put it in one of the fights he co-hosted, a “lap dog” for Megatron, Shockwave in most comics is out for Megatron’s command not for the glory and power Starscream seeks but because he believes his logical reasoning is better equipped to assume command of the Decepticon goal of conquest. Also, giant cannon trumps handgun any day. 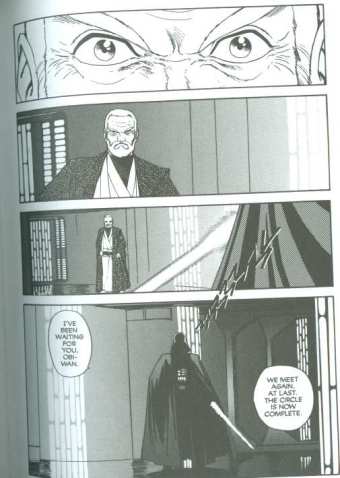 The manga-style version of this fight is just the best interpretation of the final chronological Vader/Obi-Wan this side of the actual movie. And now you can also see it as Vader getting his revenge for what Obi-Wan did to him (although Vader deserved it frankly). I like the samurai influence as Obi-Wan removes his lightsaber. You’ll have to see the fight to see what I mean.

And we’ll take our break here. More coming next week.