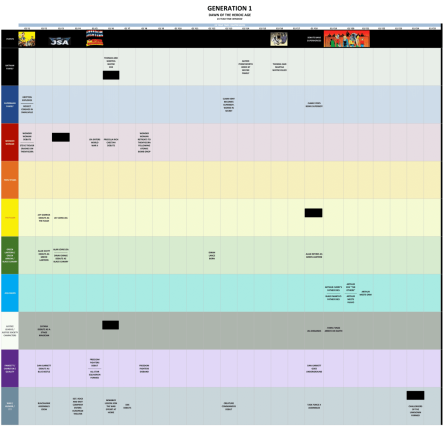 Yesterday we looked at the first four generations of the new DC Timeline, a timeline that was already created around Rebirth to make up for the lack of any consistency in the New 52 period. However, DiDio and the gang have shown little interest in a definite timeline, which they proved when Brian Michael Bendis, who has never cared about continuity, was brought in. And yet you have Grant Morrison, who wants everything to be canon whether it makes sense or not. I see this not going well.

However you may have noticed the math is a bit funny here. By my count there is about 60 years worth of events between the four generations. However, World War II, which now happened after Wonder Woman’s debut so she can be the world’s first superhero rather than the cause of her becoming one in the first place, didn’t happen 60 years ago. In fact all three of the Trinity of the DCU–Superman, Wonder Woman, and Batman–have themselves been around longer than 80 years. So what’s going to fill that gap?

Well, at this point we’re running on rumors and I’m not necessarily happy about that. ScreenRant has our rumored answers for what the Fifth Generation, the 5G–which may already show that DC is now owned by a phone company–of the title of this new continuity, has in store. Since this is rumor to my best knowledge I’m treating this more as a thought experiment in case DC wises up (good luck with that) and isn’t going this route, but it’s a path rife with questions and blunders.

Generation One begins with the Wonder Woman as the first public superhero until the appearance of Superman, which starts the second generation. The third generation spans the time from Crisis on Infinite Earths (1986) to Flashpoint (2011). The fourth-generation would then cover the events of The New 52 through Rebirth – aka the present day.

I’ve been thinking about this one a bit more. How are the events like Crisis On Infinite Earths, Zero Hour, and especially Flashpoint still in continuity when they basically rewrote continuity, two out of the three even being hard reboots of the DC Universe. I suppose Flashpoint still happened from Barry Allen’s perspective (although somehow the Batman of the Flashpoint timeline ended up in the regular DCU because Superman’s daddy came back and turned evil so why not Batman’s) but otherwise all of this happening is kind of confusing.

In a Facebook Live video, DiDio addressed several matters, including plans for the DCU continuity for 2020 and beyond. One of the topics he addressed was the importance of the upcoming Wonder Woman #750.

In this statement, DiDio said the following (via BleedingCool) :

There’s been a lot of chatter, myself included, about our timeline. The purpose is to bring in a baseline of storytelling that brings a level of consistency and more uniformity in the interpretations of the characters. We are looking to build a series of books that will re-tell the history of the DC Universe. In some ways, that will become our bible for the DC Universe.

One of the first places you’ll see this happening is in Wonder Woman #750. The change in numbering is purposeful in the sense that [ Wonder Woman #750] is the first time that we’re acknowledging the timeline and establishing [Wonder Woman] as our first superhero, in a story by Scott Snyder and Bryan Hitch. Something similar is going to be happening in The Flash.

It didn’t do Wally West any favors either.

Dan, you’re the one who tossed out the old timeline, acting as if Crisis On Infinite Earths was an edict to rewrite the universe every few years (if memory serves he even claimed Carmen Infantino basically gave that as advice) even though writers were in the middle of storylines and directions they were taking the characters, had no established timeline for the New 52 which is one of the complaints against it, and tossed out established histories in favor of whatever the writer at the time wanted. Even that wasn’t enough because George Peréz recently came out and said that he couldn’t work on Superman because nobody told him what history Grant Morrison was giving him over in Action Comics, and yes I now feel bad about taking Peréz to task back when I reviewed his brief run when it came out. When did you start caring about timelines? You even told the showrunners for Beast Machines: Transformers to ignore Beast Wars: Transformers as I learned recently and in hindsight we probably gave Bob Skir too much flack as well. This is not something new, it’s how DiDio approaches continuity–with high explosives and a grimdark makeover.

And how is The Flash going to factor into this. Granted I haven’t read Wonder Woman #750 and probably wouldn’t if I had money coming in because Rebirth was the last gasp of the real DC Universe, but I don’t even know how she’s part of this new time change which from what I can tell is itself independent of the changes from Rebirth and Doomsday Clock. Rebirth was forced on DiDio and yet someone didn’t think putting him back in full charge when it was over wouldn’t lead to him backpedaling on everything. But let’s jump back up in the article. What is the rumored planned for 5G?

The fifth-generation (5G) is rumored to center around the idea that many of the flagship characters like Batman, Superman, Wonder Woman, Green Lantern, Flash, Aquaman, and will step aside and cede their mantles to replacements to a younger generation.

This line confuses me. DiDio is notoriously against the “legacy hero” idea. Under his reign (of terror) we’ve seen Barry Allen brought back to life and Hal absolved of his mass murder by blaming it on a yellow space bug instead of snapping because everything he loved and protected was wiped out. (And yet Superman is the one who goes insane just from losing Lois. No offense intended to the supposed greatest Green Lantern ever–when he’s actually conscious–but in no universe is Hal Jordan more mentally stable than Clark Kent, I don’t care how strong Hal’s will power is.) He’s been trying to kill off Nightwing longer than Quesada had been trying to kill the Spider-Marriage. Now he wants to give the mantles to a new generation and let the old heroes retire?

In other research I read that one thought was that Superboy, the one Bendis aged up and ruined everything fans liked about the character–because Bendis–would be the new Superman and I think one said Batwing would be the new Batman or maybe Damian? Damian would certainly make more sense although I have to ask what that does to Terry in the DCU (mis)take on Batman Beyond. Wonder Woman I believe would be Cassie, although I don’t know if Donna is alive or not since you have to have the Phoenix Force or the Autobot Matrix Of Leadership to bounce back and forth more than she has (and I’m not even sure that joke is that big an exaggeration). I’m not sure on the rest but I still find this hard to believe DiDio would be okay with this as a full series. An alternate universe or another “timey-wimey” event maybe.

The next generation we deserved and deserved better.

I’m guessing this is somehow supposed to fill in the gap. I haven’t done a proper “generational year” to “real world year” comparison because we don’t know when World War II started versus when the Justice Society got involved. This could be a way to skirt fan complaints about how they’ve been getting the characters wrong and yet another attempt to “diversify” the cast not by creating new heroes but by slapping popular names on old characters–because that worked so well last time–so they can create the characters they want. The same problem exists though…the sliding timeline. National Comics Publications, the company that rebranded as DC Comics once had a chance to push their series forward by simply evolving the Superman/Clark/Lois relationship (and this time I mean working relationship, not necessarily their romantic one but I’m sure that would follow) by having her learn Clark was Superman back in issue #8 of the original series all the way back in 1940, but rejected it because they didn’t want to risk any changes after the Action Comics and solo comic stories were so popular. The time to pull that off is now long past because of it. Trying to have the kids or grandkids now would be hard to pull off. Damian Wayne and John Kent worked because they were kids who could have stories their dads couldn’t, and they tossed that idea out. Now they’ll just be their dads’ identities and a step down as characters. It’s like Stephanie Brown as Robin or Batgirl, or Sam Wilson as Captain America. It’s a good idea in theory but a step down from their own superhero identities, making them an also-ran.

This might work as an alternate continuity (one comment I saw compared it to the now defunct Ultimate Universe–which outside of Miles was a mercy killing, which is why he was transferred to the main Marvel universe) but as the new direction for the universe? DiDio still thinks he can bring in new readers and win over the “cool kids” at the expense of classic fans. Transformers fans didn’t like the changes made between Beast Wars and Beast Machines and those longtime fans (I don’t know if kids who liked the former were upset by the latter) were the same age as the demographic he’s targeting now with a product decisive kept kid-unfriendly. The point is he never changes and he never learns. It makes me wonder why he took over DC Comics when he has no interest in what made the DC universe special and beloved by fans, preferring his more cynical grimdark take. Now he wants to show classic characters aside, if the rumor is right, in favor of new characters when he spent so much time trying to undo the legacies of Dick Grayson and Wally West? That’s why I have a hard time believing in any of this. That and under DiDio the DC Universe has had a lot of identity issues. Maybe that’s why Identity Crisis is his first big change. The name is pretty much DiDio’s approach in a nutshell.