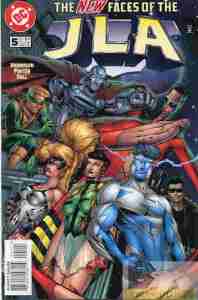 Professor Ivo and Dr. T.O. Morrow create an android called Tomorrow Woman, passing her off as a new superhero, and manage to get her into the new incarnation of the Justice League. Tomorrow Woman joins the League in trying to stop “IF”, a futuristic weapon in the hands of the military that somehow got lose and went on a rampage. The only thing that can stop it is an electromagnetic pulse, and the evil doctors have put such a weapon in her to kill the JLA. However, she has grown a conscience and sacrifices herself to stop IF without killing the League, earning the one thing that isn’t in her vocabulary (on purpose)…freedom! But as the pastor at Metamorpho’s funeral noted, the heroes don’t stay dead anymore.

What they got right: Tomorrow Woman was such an interesting idea that numerous attempts have been made to bring her back, although they haven’t really stuck and I don’t even know if she exists or has existed in the current continuity. It does go into what being a hero is. There’s also a fun scene with other heroes attempting to fill the remaining spot.

What they got wrong: But why is there one spot remaining? The Justice League Of America used to be a collection of most of Earth’s greatest heroes, and it was already a mistake to limit that number and create spin-off teams. It’s kind of pointless and kind of disappointing. And sadly we went from long-haired Superman (how did Superman hear Kyle comment on the long hair mid-teleport and why be so snippy to him?) to the electric Superman period and that was a bad idea too. And it’s not the last we’ll see of him in these reviews although the next story decided to play loose with God and angels so I didn’t continue the series after this. Personal preference and if you don’t like it that’s your hang-up, not mine. It’s my collection, I can read what I want.

Recommendation: A good story but not a great one, and despite numerous attempts she’s never had more than a small fanbase. It’s worth checking out but not going crazy to track down.