We return to Eternia but we also return to the pre-minicomics, the illustrated booklets of series 1. Four of these were produced and tonight, via He-Man.org, we’ll be looking at the third one. To recap this continuity: He-Man went out from his home village to protect Castle Grayskull because it was Tuesday or something (seriously, no reason is given), and comes across a green-skinned Goddess who gives him a power-boosting harness, a harness that creates force fields and looks exactly the same as the power-boosting harness (I wonder if he ever mixed those up?), and the Battle Ram vehicle. Skeletor comes from another dimension and wants to use the power of Grayskull to open a portal to his home dimension so he can lead an army to conquer Eternia because it’s there and they don’t own it.

This story focuses on those gifts He-Man was given and gives Mer-Man something to do in this story besides stand around. It’s a story in which the heroes look foolish until the final act. Must be Friday the 13th on Eternia. 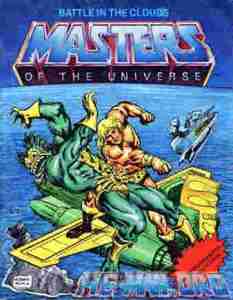 He-Man insists you pay for your airline tickets.

Masters Of The Universe series 1 #3

“Battle In The Clouds”

We open on Stratos, who will be of little help until the last few pages. Skeletor is screaming his usual “you can’t stop me from ruling everything He-Man neener neener neener” and goes to check things out, just in time to see He-Man kick Skeletor’s butt without him. He’s not off to a good start in this story. As Skeletor takes a dive…or rather He-Man tosses him into the water (get to used to that one, bonehead…it will happen a lot once Filmation takes over your story…also, mud) where he’s rescued by Mer-Man. Impressed by He-Man’s strength boosting costume (just his usual harness), he volunteers to help Skeletor if he can keep the harness and the Battle Ram. Skeletor agrees and the two fire on He-Man. Stratos arrives just in time to lift He-Man to safety…although according to the art it’s only the “sky sled” portion and not the carrier unit or whatever it was called. What happened to the other half of the vehicle? Also, doesn’t that unit fly on its own? Why is Stratos carrying it? To which I now ask “then why does the front end launch from the back-end if it does nothing? Somebody really didn’t plan this vehicle out in the story stage.

Oh, and a gust of wind knocks He-Man off the Battle Ram and Stratos doesn’t hear him fall off. Was He-Man not screaming when this happened? Was the wind that hard to hear over? This looks bad for both heroes really. And the hits (to our heroes’ collective egos) just keep on coming! He-Man’s magic harness keeps him alive but he is knocked out. Then Skeletor helps Mer-Man defeat Teela off-page and steal Teela’s horse (and tie her to a tree) to get to where He-Man fell and Mer-Man swipes He-Man’s power boosting harness. This is not a good day to be a hero is it? The interesting thing I think this is the first time in three booklets that we’ve actually seen Teela herself in the snake armor that came with the figure. (Remember, this predates Snake Mountain’s existence in Masters lore.) Usually this is meant to represent the Goddess, especially in series 2, the minicomics made in cooperation with DC Comics, where she doesn’t even have green skin and Teela is her clone created so Skeletor…no, I don’t want to think about that plan again. Point is this is unusual for Teela in official media. 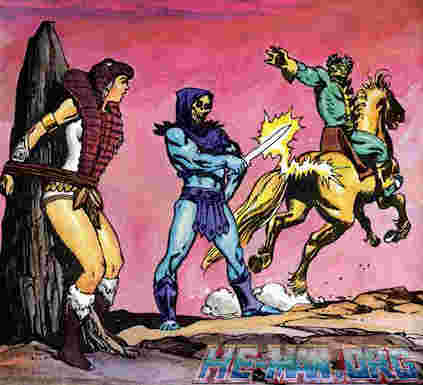 “You take her horse. I’ll watch over her like she was my own daughter.”

Mer-Man runs off to swipe the flying part of the Battle Ram (what did happen to the launcher) and He-Man summons Battle Cat, who runs to his master (happy to not have a vehicle taking his job), takes him to get the force field harness, takes him to Man-At-Arms, takes him to Stratos’s mountain, and is sent off because it’s too steep to climb. The last image we see in five pages of his appearance is him sulking off because master sent him away. I bet that’s what happened to the launcher. Battle Cat jealously destroyed it. “Now he will need me to travel on the ground”. We will not see him again until the DC minicomics but I haven’t reviewed any yet with him in it.

I also just realized something: this version of the Battle Ram is supposed to be able to travel by warping space. Why did he need to drive it home?

Anyway, Mer-Man makes it to the top of the mountain (I’m not sure what happened to Teela’s horse…or Teela for that matter as she never shows up again in this story…presumable she’s still tied to that tree and her horse is MIA) and finds the Battle Ram. Where’s Stratos? Good question. Anyway he starts testing all the buttons and nearly shoots himself because unlike the toy the gun is actually mobile and can aim in different directions. Although given the IQ on display in this story anything’s possible. Nobody’s having a good day today really.

He-Man and Man-At-Arms give chase in his Wind Raider (before everybody had one…like it’s Eternia’s answer to the Mercedes) but they’re attacked. Despite He-Man being shown riding on the side it’s Man-At-Arms term to fall and look like an idiot. He’s not hurt thanks to his “remarkable armor”, because apparently armor is better for surviving a fall from who knows how many feet in the air than a magic harness. Pro tip, kids. He-Man in the Wind Raider and Mer-Man on the Battle Ram exchange shots for a while and then Stratos not only shows up but does something helpful, knocking Mer-Man of the Battle Ram (I’m guessing he survived his fall because of……) and takes control of the vehicle. They go to retrieve Man-At-Arms off of the ledge he fell on and go find Teela and retrieve his power-boosting harness. In reverse order according to the dialog. I understand wanting to grab the harness while they have a chance, but you know where Man-At-Arms is. Shouldn’t you snag him first and then all go find Teela? Not that we see it happen so last we see her she’s tied to a tree. The warrior goddess, my friends!

Overall I really didn’t enjoy this one. Pretty much everybody looks like a chump at least once in this story, especially the heroes. (Of course there were only two villains and Skeletor disappears so early he was barely necessary.) Battle Cat is woefully underused, Stratos only shows up in the last two pages, Mer-Man basically wins until Stratos gets a lucky shot in, and it just didn’t impress me. The art is really nice but that doesn’t save this story. You can find this in Dark Horse’s collection of the minicomics for both print and Amazon Kindle but this is worth seeing only because it’s one of the few illustrated booklets. In the end it just doesn’t hold up as a story.

Next time we look at transforming robots, but we aren’t going to Cybertron. We’re going to McDonalds. Ever hear of Commandrons?