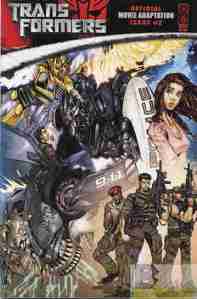 The soldiers manage to call for support and sabot rounds are able to bring Scorponok down. Meanwhile, Sam’s car returns and Sam makes a run for it, the car chasing him as well as a police car. Mikaela happens to see Sam racing away on his bicycle and goes after him hoping to help. The police car catches up first, only this one is the Decepticon Barricade. He asks Sam about the “ancestral artifacts” and tries to force him to answer just as Bumblebee arrives. Barricade fights Bumblebee while Frenzy goes after the humans, Mikaela managing to smash the little Decepticon, who later disguises himself (or rather his head does) as Mikaela’s phone. Bumblebee escapes with the humans and everyone arrives as Optimus Prime and the other Autobots arrive.

What they got right: Once again the reduced space benefits the story. That padding with the cellular phone rep is gone and not missed. Bumblebee does a long-range scan when Mikaela still has her “too good for an older Camero” nonsense. And Barricade asks for ancestral artifacts instead of “glasses”, which now that I read it makes more sense given how little Barricade should know about our planet.

What they got wrong: They got his eBay name wrong, which could just be from the latest draft Oprisko had available. Mikaela doesn’t come off as the “eeeeeekkk” kind of scared screamer. Lennox gets a phone from a random man in the village they head for instead of Epps. (Although we don’t have to hear about Epps’ “left cheek” so it’s sort of a trade-off.)

Recommendation: Like last issue, the adaptation seems to be an improvement over the movie. I’m hoping this trend continues next issue. Please tell me “Sam’s Happy Time” was taken out. So thus far, read the adaptation instead of watching the movie.