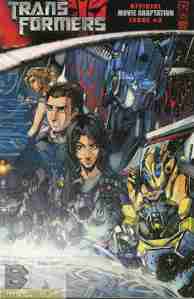 “No, the CG effect we put in later is…will one of you look in the right direction?”

Sam and Mikaela meet the Autobots: Optimus Prime, Jazz, Ratchet, Ironhide, and are properly introduced to Bumblebee. They head back to Sam’s to find the glasses, but Jazz accidentally knocks out the power. Before Sam and Mikaela can get the glasses to the Autobots they’re intercepted by Sector Seven and taken in. The Autobots attempt to rescue them but only succeed in Bumblebee getting caught. All they can do is continue trying to find the All-Spark. Meanwhile, Sam and Mikaela meet Lennox’s team and some who caught Frenzy on Air Force One. It’s there that the meet NBE-1, or as Optimus showed the high schoolers, the leader of the Decepticons, Megatron, while Frenzy is secretly calling in his comrades.

What they got right: Yet again the comic trims out so much of the crap from the movie. The greatest hacker ever/black geek stereotype is gone. The other hacker we didn’t have to see being a smart mouth so she’s only here in an altered form because she’s important to a later scene, as is the secretary of defense. No “Sam’s Happy Time”, no Bumblebee “lubricating” Simmons, no Simmons in his underwear being a jack ass, no unnecessary and short subplot involving Mikaela’s dad–all the unnecessary junk is removed. Usually a comic adaptation loses something in the space reduction but this is a case of the adaptation actually benefiting from having to cut down the movie.

What they got wrong: However, we don’t get to hear about why Bumblebee was using his radio to communicate. It’s in the prequel miniseries for this movie but if you missed that you won’t know.

Other notes: I’m guessing an earlier draft of the script has Mikaela naming them Autobots after Optimus referred to themselves as “autonomous robots” because the novelization did the same thing. In the movie it was changed to Ratchet stating “Autobots for short”, which I think works better.

Recommendation: Despite the many flaws I liked the first movie when I saw it (and it got worse from there) but I wonder if I would after a rewatch. You may be better off sticking with the adaptation.