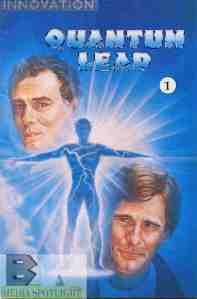 In this issue Sam leaps into my drawing mannequin.

It took me a half hour to find the full explanation part of the intro (it was cut down in later seasons) so hopefully it stays up awhile.

March 25th, 1968, Memphis, Tennessee (man, Op-Center has really ruined timestamps for me): Sam leaps into Karen Connors, a white teach teaching a remedial class with plenty of minorities, including the rambunctious but otherwise decent kid Randy. Sam’s mission is to help Karen keep the remedial education program going, which she failed to do when she couldn’t reach Randy or any of the other kids. This is troubling for Sam because he’s also close to the date of Martin Luther King Jr’s assassination and can’t do anything to stop it. Randy ends up saving Karen from some Black Panther types (the group, not the superhero) and they talk about King’s message, which starts breaking through to the boy. With Sam’s help, Karen does get the kids’ grades up and saves the program, the kids in this class going on to do some good things. As Al notes, Sam couldn’t save King but he kept the dream alive. But who will keep Sam alive when his next leap starts right in the electric chair?

What they got right: The story itself is really good. While you could argue that Sam/Karen connects with Randy a bit easy given the grief he’s given her, Randy isn’t a bad kid and maybe saving her made him feel “strong” enough to let his guard down or something. At any rate it’s a good introduction to readers who may not have seen the series. They even include a comic version of the explanation that started each episode.

What they got wrong: It’s another comic with the painted art style. While this one fairs better than most as they at least try to mix comic art and painted art (it still fails at being photorealistic but they do at least try to work in what lineart could have benefited) it still doesn’t work for me.

Recommendation: This was a good introductory episode. I read some of my friend’s issues once and the series never clicked for me at the time, but this is a good adaptation of the series and worth checking out for fans.