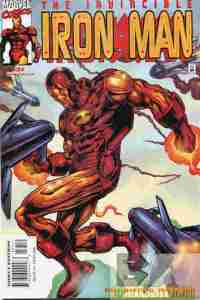 “I see the general’s still mad at me.”

I’m guessing on these credits due to past experience but who thought replacing these with sitcom character names was a good idea? Do you NOT want your readers to figure out who did what? Joke credits are dumb to begin with but at least you should be able to tell who did what job from them.

It starts with Tony in the middle of a shoot-out before flashing back to how we got to this point. Tony is testing out technology that combines the Sons Of Yinsen’s camouflage and Reed Richards’ teleporter, but Iron Man is attacked by two men in armor. While he defeats them they somehow manage to use his teleporter to escape. As Pepper and Happy talk about parting ways with Tony to have a fresh start. Tony later attends a gathering by his old friend Tyberius Stone, where Rumiko dumps him for not visiting her in the hospital while Iron Man was dealing with the “Maximum Security” event. Ty also introduces his new “Dreamvision”, a way to feel like you’re part of even older movies via nanites and a headpiece. After the event Tony tries to apologize to Rumiko only to find her in bed…with Tyberius.

What they got right: The opener certainly grabs your attention.

What they got wrong: So much of the rest of it. Let’s start with the idea of people willingly allowing themselves to be injected by nanites, even in the Marvel Universe. I highly doubt most people are that interested in the upgrade from virtual reality when nobody’s really into virtual reality itself in the first place. I’m also hoping Tony’s own recent issues with nanites (as seen in the Bad Blood miniseries) comes into play somehow. Then there’s the teleporter built into the Sons’s chest-mounted chip. How was someone outside of the armor able to use it or even knew how to target? Finally there’s Rumiko. I knew last issue’s filler story was off when she so easily brushed off Tony canceling a date but at least remember that in your story. It’s odd that not only is she mad that Tony didn’t show up (and apparently she was in the hospital at the time) but she immediately hops into bed with Tony’s old friend? Did Ty not mention he and Tony were friends or that they used to compete over women? Is Rumiko really that bad a person that she immediately sleeps with some other guy when she’s…you know what, I don’t think anybody at this point knew what to do with Rumiko since Busiek’s departure until a later writer who oddly enough did write good Iron Man. But we’ll get to that eventually.

Recommendation: I am not enjoying this at the start. Too many things bug me. I didn’t even mention the art, especially after how awesome last week’s comic was, or the continued splintering of Tony’s inner circle from him. I just can’t recommend this story based on this issue. Maybe what follows in this arc will redeem it but right now I’m not a fan.