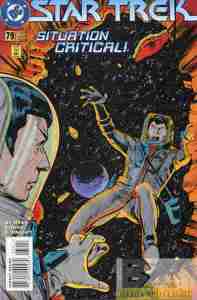 We all knew one day McCoy would push Spock too far.

Kirk is called to Starbase 7, and learns that the Romulans are denying a recent attack on a Federation outpost despite their energy signatures being all over the place, the same thing that happened to Starfleet at the Klingon outpost last issue. While Kirk is supposed to investigate, he’s instead sent to another such attack at another Starbase. They arrive at a damaged station with a reactor about to explode. Spock and McCoy join Scotty in trying to eject the warp core before it explodes while Kirk talks to an arriving Romulan ship that’s offering to aid in the investigation. The trio ejects the core and an arriving Federation ambassador with some medical experience helps McCoy with the survivors, mostly children. She believes the Romulans are part of a secret organization known as the Tal Shiar. The investigation begins, but Kirk is sure he’s missing something important.

What they got right: The mystery deepens. First Starfleet is blamed for a Romulan attack, then for a Klingon attack, and now the Romulans are blamed for an attack on Starfleet, and all deny involvement. The facial expressions got better than last issue’s total lack of emotion. Also, nice nod to the 24th century shows by bringing in the Tal Shiar, a group only invented for TNG and DS9.

What they got wrong: Not the best expressions mind you but it’s still a step up. As to what Kirk’s missing, what about that ship from the first incident I mentioned, from two issues ago? A strange ship that a Romulan ship sacrificed itself to stop so the Enterprise could warn them? You don’t think maybe they’re the ones framing everybody for these attacks? It’s a clue missed if you didn’t get that issue but the obviousness of this being a set-up should be obvious.

Recommendation: So far it’s a good arc. Depending on how it ends it might be worth picking up.