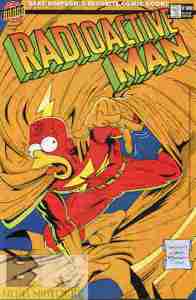 Volume 1 kept with the fake numbering.

“In His Own IMAGE”

At some point in continuity the Superior Squad has new corporate donors who want to make the group profitable. Their actions cause a lot of the team to leave, but the new bosses want to change Radioactive Man’s image, starting with an overly long cape and then trying to clone him to create a new, 90s style Radioactive Man. Meanwhile, Dr. Crab (who was mutated into a full crab man and calls himself Prawn) plots to use a machine that can reverse his mutation at the cost of Radioactive Man’s powers. With the shrapnel gone Radioactive Man’s memories come back, as does his time as Radio Man, who uses his radio powers to defeat Crab, who only partially undoes his mutation while Claude returns to being Radioactive Man. Then our hero meets Radioactive Worm, a mutated worm in the Mister Mind image, who claims to have been behind all of Radioactive Man’s problems but couldn’t control his mind due to the shrapnel. The worm ends up running into a broken power cord and dying while Radioactive Man sues his clone for trademark infringement. As if this wasn’t enough, he learns that one of his enemies, Pneumatica, is actually an android with the brainwashed…brain of his lost missing mother. Also by now Claude II appears to know his son is Radioactive Man and the Kanes have a family reunion. Not important to the story but Claude now has a second ward, Dodd, that may have shown up in an earlier issue. This is the only volume 1 comic I currently own.

I see a few different send-ups here. You have the dark and strange retconning of the 1990s (which as we learn this morning is only getting worse), shots at Image comics like Radioactive Man being made to wear an excessively long cape while Dr. Crab is renamed Prawn, and even a quick parody of Captain “Shazam” Marvel with Radio Man, which would see again in another issue of volume 2 as a different character, as well as a take on Mister Mind, who began as a Captain Marvel adversary in the old Fawcett Comics days. (Bongo may have a thing with final issues and Radio Man.) The only problem is the art here is better than most 90s comics.

I still have a few comics to go before we say goodbye to Radioactive Man and Zenith City but this was a fun issue and I do recommend checking the character out if you get the chance. I’m also hoping I’ll be back to my format next week, because I know I won’t be tomorrow. It’s been that kind of week.