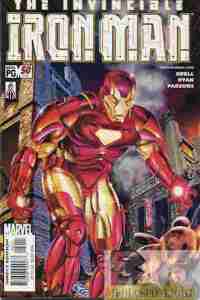 This is a bit overkill to find a contact lens.

Black Widow asks Tony to investigate war crimes by Eastern Europe dictator Milos Radanovich, accused of ethnic cleansing but keeping the US out of it with his oil reserves. He meets with the man and learns he has obtained a War Wagon, which he modified. While he sees all the good parts Tony convinces him to let him see the bad parts, but he’s only allowed to do so from the air…for his own protection of course. The plane gets shot down however, the pilot ejecting Tony so the dictator doesn’t harm his wife. Tony runs into a coalition of Christians and Muslims, set against each other by Radanovich, after observing a firing squad ordered by Radanovich. He also meet a woman and her daughter, as well as the old army armor that he was in Vietnam (or wherever the war was moved to for the sliding Marvel timeline) to repair. The problem is the suit requires a particular set of drugs just for the wearer to keep up with the simple computer (before AI really got advanced) operating it. The woman decides to force the fight by letting Radanovich, whom she wants so badly to kill for personal reasons, where Tony is. As the daughter helps him find his Iron Man armor the woman puts on the old armor, and although she’s killed she takes Radanovich with her, freeing the country from his rule.

What they got right: While I’d usually complain about the dirtier looking art from a personal preference it actually matches the tone of the story and still looks good. I think Grell was trying to comment on actual ethnic cleansing that had been going on either at the time or before then but it still holds up to a modern reader. This is how you do commentary. The addition of the pre-Iron Man armor being designed for the military (which they actually are working on even today, and I’m willing to bet was itself inspired by Iron Man) to his history works and even though we recently finished the Sons Of Yinsen story the flashback is good for a 50th issue story.

What they got wrong: Get used to not seeing much superhero stuff from this title for a while. Grell didn’t seem to really want to write a story about Iron Man, since most of his stories involve Tony without the armor. Sadly, giving superhero titles to people who don’t want to tell superhero stories has become a Marvel comics trend, but this is also too similar a story to the recent annual, just replace an Asian dictator with a former Soviet one.

Recommendation: A good enough Tony Stark story to read if you come across it but not much of an Iron Man one. Mildly recommended.