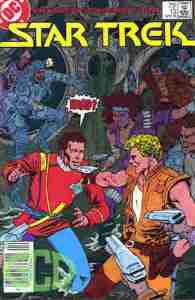 Father’s Day has always been a problem for Kirk.

Pretending to be his mirror counterpart, Kirk arranges to lead the invasion fleet, with the Empire not knowing it’s actually a trap. Kirk and Marlena…yeah, guess what they do before she brings him to see the rest of the rebellion. It’s Kirk and a hot woman after all. There they find that Mirror Kirk didn’t actually kill Mirror David, who is alive and part of the rebels. He joins them as do the two Spocks, now working together, but one of the rebels is a spy for the Empire and rats Kirk out, putting him and the Excelsior in the crosshairs of the entire fleet.

What they got right: Technically I’m neutral on using Mirror David because I also see the draw in doing so, unnecessary as it might be. Kirk’s plan is actually a good one. It’s good to see Mirror Spock back on the good guy side. The cliffhanger works well. We also get to see where and how the Mirror Universe could have diverted from the regular Trek universe and it actually makes sense.

What they got wrong: The panel where the Excelsior demonstrates its power seems to have the weapons fire coming from somewhere behind it. It seems like a hard one to get wrong and yet they did.

Recommendation: The story is getting pretty good. Depending on how it ends this may be a good miniseries to check out (I’m using a trade) but this particular issue only works solo if you want a potential history for the Mirror Universe. Otherwise it only works as part of the miniseries.