I wasn’t happy with the original review so here’s a do over since we’re so close to the end of this series. 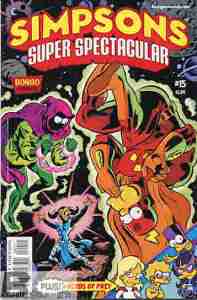 Is there a quota on collecting jokes? (I must have done a bunch of them around the time of the original review.)

In our first tale Lisa has a bad ankle and can’t help rescue Bartman from the crazy Cat Lady Woman and puts the call out for other heroes. She gets Badgirl (Jessica Lovejoy), The Wonderful Twins (Terri and Sherri), Greta Wolfcastle (Powersauce Girl because her dad wants her to help sell some protein bars he’s currently shilling), and are later joined by Martin in drag as Noir Nightingale (with the power of a girly scream). They rescue Bartman…mostly. It’s a play on the Birds Of Prey and not a bad story. Despite Bart’s objections I wouldn’t mind seeing them team up again.

Our second tale has Plasmo disappearing and Cheech gaining Radioactive Man’s help when Ta-Da, a woman from another dimension, asks for Plasmo’s help but is really just after his magical secrets. She also captures Gloria to force Radioactive Man to help her but she decks the sorceress instead. It’s also a good story.

I really enjoyed this issue. It’s worth looking into.