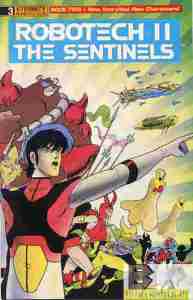 Between the last issue I reviewed and this one the Robotech Expeditionary Force made their way to Tirol only to find the Robotech Masters gone and the planet devastated by the Invid. With their ship damaged they weren’t prepared for more aliens arriving. However, these are the titular Sentinels, beings of other worlds enslaved by the Invid. They’ve come seeing the REF’s alliance since they drove off the Invid, but the discussion is shelved when an AI hunter ship comes pursing the Sentinels and their ship, the Farrago. The temporarily united force comes up with a plan to hopefully stop the dangerous machine. Meanwhile someone watches as Wolfe and Minmei get closer.

What they got right: The Sentinels finally appear. I don’t know how long it would have taken for the original TV version but there is some interesting diversity and some good potential in this cast. You have the amazon women, the anthropomorphic bears and foxes, the machines, and the…demon looking guy. I want to see where this goes. The humorous moments do not take away from the threat of the Invid Pursuer.

What they got wrong: The “demon looking guy”, Burak, is the only one without a mate. Oddly coincidental.

Recommendation: Each book is a different story arc (not counting the “Worlds Of Robotech” one-shots during the Academy run) so it’s hard to judge without the rest of this arc but it does get your attention and could lead to some new takes on the Robotech universe without tossing out the original. It might be worth giving a read.