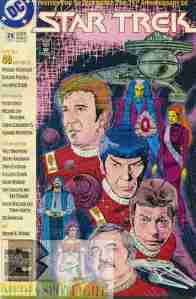 It’s disappointing when the cover doesn’t give me anything to work with. Nice art though.

I don’t have the first two issues as of this writing so luckily the Captain’s Logs are in these comics. The head of a mining colony is found dead just as he was hoping to find something to tell the Federation about goings on. This leads Kirk and company to investigate before the vice head loses hers next. It all involves a fight for the title of Salla (the leader I assume) of the Nasgul between the current Salla and his sister. During the investigation they find circumstantial evidence tying the sister, Domine Ravina, and the Klingons. Meanwhile, the religious relic the Salla and Ravine both want is in one of the worst hands possible for Kirk: Hardcourt Fenton Mudd and his new young protege, Shilo. Things get crazier when the Federation is found working with the true Salla when they arrive for both the false Salla and Ravine, the Klingons arrive claiming it was a splinter faction behind the deal with Ravine, and Kirk has to rescue Harry from Ravine and somehow sort this all out. Just another adventure with Harry Mudd.

What they got right: This is the Harry Mudd we know and love. (Glares at Star Trek: Discovery‘s psycho version.) We have the usual fun, crazy, greedy, cowardly Harry and even Kirk admits to Shilo he likes the guy. Shilo actually makes a nice addition to Harry’s team. I think being a father figure to the teen may benefit him as much as her sleep-inducing flute. Weinstein gets the characters’ voices so well I can hear the actors giving the performance and the chemistry between Shatner/Kirk and Roger C. Carmel/Mudd translates well. The original characters for this story work as well. Among the 25 anniversary pieces are articles by Weinstein, Chris Claremount, Michael Jan Friedman, and Peter David, who have written a number of Star Trek stories in comics and novels.

What they got wrong: There are panels where the characters seem to be in the wrong position. Not as bad as the issue I reviewed last week but it still pops up and I’m not sure where they’re standing.

Recommendation: I haven’t read the first two issues but I want to. Based on this one Harry Mudd fans should really get this one and other Trek fans should look into it as well.