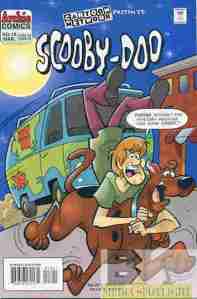 Guess it heard about the vehicles it was replaced with for “13 Ghosts Of Scooby-Doo”.

In “The Mystery Machine Mystery” the gang has been inducted into the Great Detectives Hall Of Fame. (I don’t know if it’s the first time they’ve been inducted into a detective club in the franchise but it won’t be the last.) In this case however the Mystery Machine suddenly goes crazy and attacks the event. Was it a plan to embarrass the gang or something else? I have to give Kirschbaum credit for finally figuring out how to tell a Scooby story. While he’s still doing two stories a comic instead of one he does a far better job of setting up clues and having the gang solve the mystery rather than wacky hijinks going undercover. He still doesn’t point to the villain very well but it’s a step up from what he’s been doing.

“Cave Fear!” is a shorter story, finding the gang visiting Carlsgood Caverns. Of course the tourist trade there is dealing with monsters, but this time it’s Shaggy and Scooby who uncover the bad guys. This is kind of the other story in reverse. The villain is rather obvious but the mystery is solved as Shag and Scoob come upon them changing. That doesn’t keep it from being a bad story though, but it is rare to see Fred, Velma, and Daphne being the ones being chased while Shaggy and Scooby solve the mystery.  The only real complaint is that the art team recycle so many old character designs for the new characters (and I swear in one panel they just used a stock shot of Shaggy and Scooby you used to see in the closing credits back when HB shows ended with a little window showing the character models), making the kind couple who ran the amusement park with Charlie the robot into the villains.

Overall this was actually a good issue. At least the usual nonsense the writer employed previously was finally gone. Too bad it didn’t happen when Scrappy was in the comic. Trying to use him now would be rather impossible given that the internet has sadly trashed the character too much for anyone to use him, never mind use him properly. (I’m willing to give it a try though.) I’m glad to see he was finally getting a grasp of the show’s style. Too bad this is the last Archie issue I have and we’ll be shifting to the early DC stuff next time. However, I can recommend checking this out, but not going crazy to find it, even if you’re a Scooby fan.