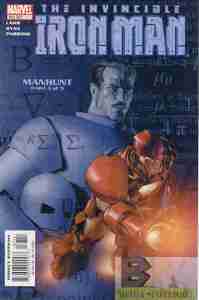 “You’d think I of all people wouldn’t forget to pay the electric bill.”

Tony barely manages to defeat this latest assassin, meaning he’s going to have to go into SHIELD custody to continue healing. Poor Rumiko gets left behind again as they leave but this may be to her benefit when a supposed North Korean attack helicopter goes after the van taking them away. Tony calls for his Iron Man armor and manages to take the copter down, but rather than continue to the hospital he goes to the North Korean embassy knowing they’re both being framed and looking for answers. Thanks to some false evidence FBI Agent Neil Stretch is convinced Tony is dirty now and orders him arrested. However, Iron Man escapes with someone the North Koreans were torturing, hoping to get some answers out of him, thus getting himself declared a fugitive. And Stretch is willing to use the comatose Happy to strongarm Pepper (who’s already mad at Tony) to get what he wants.

What they got right: I will give credit for the human side of things being handled well. Poor Rumiko being shut out, Stretch going through a divorce (not necessary but certainly plays into why he’s such an @#$hat), and what’s happening with Pepper are all well done.

What they got wrong: I’m guessing this when Laws began taking over completely from Grell, and don’t expect too many supervillains during his run either. If you writers don’t want to do superhero comics, then stop accepting the job! Plenty of us out here willing to do it. You can make other comics, or if comics aren’t your thing go back to doing books. Or in Laws’ case RPG, as this is the only superhero credit I found on Wikipedia (granted, question the source) among fantasy and Star Trek RPGs and novels. Also, the swearing is done by crossing out the dialog rather than the tried and true method I used above and has been part of comics since they only existed in newspapers.

Recommendation: Still an interesting story, still not a superhero story. Might be worth looking into but I miss watching Iron Man fight supervillains.