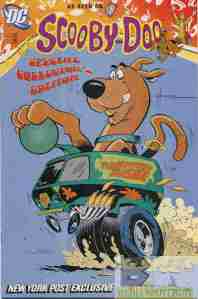 The first story sees the gang showing up on a knockoff of MTV’s Total Request Live where the guest is not Dick Clark. A few of the people working on the show wish they weren’t even before a ghost starts haunting their signal. I showed in an old Friday Night fightss how they put a stop to that. The second story has Velma adding gadgets to the Mystery Machine when it’s stolen by crooks looking to use the new gear for their criminal campaigns. The gang put a stop to it, as I demonstrated years ago in another Friday Night Fight.

One thing to note is that the art style more closely matches What’s New Scooby Doo?, the latest incarnation at the time. You mostly see it in Fred’s outfit and maybe Daphne’s since those were the only major changes to the classic models. Both are fun stories. The first one is a rather good mystery, which has been rare for this run. The second has the gang getting to do the spooking for a change, and was a nice side story.

Overall this is a pretty good issue. Mine came out of the newspaper since I was the one in charge of recycling the old newspapers at the grocery store I used to work at so I got lucky. However, there doesn’t seem to be any huge changes from what I’d expect in the regular edition so find that one if you can. I thought this was the last of the Scooby-Doo comics, like I said on Sunday, but while getting the next comic I found a bunch more. What was the point of the resorting project again? To get the collection in the proper order? I keep finding failures on that.