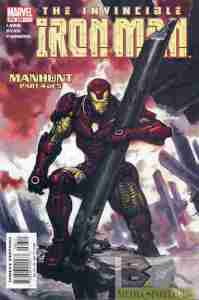 “I need to stop throwing these wild parties. Especially when I can’t drink at them.”

Pepper gives Stretch a device that can remotely shut down the Iron Man armor, originally intended to be given to the Avengers in case Tony or the armor was ever taken over (which happens every now and then). Iron Man tries to interrogate Temugin’s man, only for a remote explosive to be triggered that kills him. Tony then makes contact with another of his associates, who is upset with Temugin for various reasons, but Tony isn’t about to pay him. Meanwhile, Happy comes out of his coma. Using the information he’s gathered and a bit of detective work Iron Man tracks down Temugin, but if Tony’s injuries weren’t bad enough against a guy who could defeat him without the armor Temugin seems to have finally accepted the Mandarin’s rings…and the call to end Tony’s life.

What they got right: Tony uses his brains as much as his armor (outside of the running around with major injuries part) to find Temugin. The moment when Tony has to run from Stretch after noticing he has the deactivator and the realization that Pepper betrayed her (which he thinks is only because he told Happy about the baby and not Stetch threatening Happy) was admittedly a good scene.

What they got wrong: Laws, you’re going to need a real good reason why Rumiko doesn’t just dump him the way she’s being treated in this story, and to a lesser extent why she isn’t trying to beat the tar out of Pepper. Rumiko’s treatment in this story has been terrible. Why is it they brought her back and improved her character only to dump on her and push Tony/Pepper, then have this happen?

Recommendation: The next issue is the finale to this arc and that will ultimately sell me on it. The writing is good but some of the character treatments I’m less impressed with. Mildly recommended unless something about the finale really goes wrong.