Chapter sixteen of twenty, so things should really be getting exciting now. We have Spider-Man saving our POV character to Carnage’s initial slaughter, we have Carnage seemingly trying to distract from something, possibly what he did with the crazy juice, and we have Aunt May hoping to keep her house. Obviously Spidey vs. Carnage is the bigger deal. So why is the cover for this chapter featuring this? 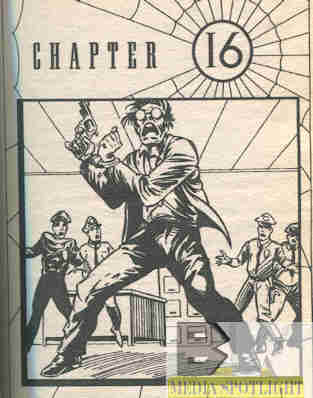 The lockdown is hit us all pretty hard. Even shut-ins like me.

The chapters in this book have been a bit short but this one was really short, or at least it felt like it. It’s basically the final fate of Dr. Catrall, emphasis on “final”. They’re prepping him for a trip to Bellevue Hospital, which for those of you who don’t know New York City is where they put the crazy people. He’s quite okay with it until someone who clearly didn’t know who this man was or his connection to Carnage (I think Spider-Man is the only person he told about Liquid Death) shouts out that Carnage was found and killed a bunch of people in a penthouse. This sends Catrall crazy, thinking he has to get Carnage and not knowing the vial’s empty. So he manages to grab a cop’s gun…in the middle of the police station so you can guess what happens.

Again the descriptions here are so well done. You get a feel for what Carnage put the doctor through, his fear and self-loathing about what happened and his role in it–not just Carnage finding out but the fact that the stuff even exists, and the surprising relief as he dies, knowing his own pain is over and hopeful that Spider-Man can stop him. While we still get a colorful description of Dr. Eric Catrall’s blood on the bench this one bring out more emotional descriptions. For Catrall it’s a happy ending as the pain is finally gone. This scene and this fate really wouldn’t have worked at any other point in the story. Do it afterwards and Catrall looks like he’s far too gone. Here at least he’s worried about getting Carnage because while still gone crazy he knows Carnage has to be stopped. He would have looked foolish AFTER Spidey stops Carnage so they had to interrupt the action in this spot for the sake of the character, making his death a bit more satisfactory given how they opted to kill him.

Of course pain is still coming for New York if Spidey doesn’t figure out what happened to the kill zombie formula. The battle continues next time. I wonder if I’m right about what Casaday did with the stuff?