I’m honestly morbidly curious about Marvel’s take on Ultraman. Superheroes rarely had happy days before the current mindset kicked in and the current regime isn’t always ready to do a superhero story. I can only guess they’ve heard manga has been outselling them and got the wrong idea why. So has everybody else at one level or another, but that’s another article. Maybe they’ll do a good job. I don’t know. That’s not the point of this article either. So what is?

In the comments for the YouTube posting of this trailer a bunch of people thought they’d be smart and make sure anyone stupidly dumb enough to insist Marvel was ripping off Way Big, the Ultraman-inspired alien form from the Ben 10 franchise, that they’re a bunch of dumby heads for not knowing this is a franchise of Japanese heroes and it’s a good thing we smarter tokusatsu fans were here to educate you. Yes, they do come off that full of themselves. To which I responded:

Can we shut up about Waybig already? You guys do know that four different Ultraman series were dubbed in English and aired on regular TV, right? There was even a cartoon pilot produced by Hanna-Barbera, Ultraman: The Adventures Begins. I’m guessing someone has heard of Ultraman, Ultra 7, Towards The Future (co-produced with Australia), or Tiga and may know something other than Ben 10. They may not understand the full history but I see so many comments immediately assuming the people not interested in tokusatsu is going to get that wrong without giving them a chance. There are crossover fans too you know.

These are American comic fans. How about comments about DC’s Ultraman, the first in a string of evil Superman stand-ins?

What I forgot to mention is that some of these shows had American produced or translated comics on US shelves. While the entiretly of the Ultraman franchise is not as well known in the US (even I don’t know all the characters), the franchise is not completely unknown to these shores. Marvel even had “Ultra Darius”, who popped up in an issue of their short-lived VR Troopers comic, which they wouldn’t have bothered with if the champions of the Land Of Light weren’t at least present in US entertainment history. They may not have the fame of Godzilla (who had his own MTV award so yes, toku smarties, the “normies” know Godzilla) but here’s a history of the franchise on US TV and in comic stores.

Right from series one (unless you count Ultra Q) the big silver monster fighter made an appearance stateside. The tale of Hyata, a member of the Science Police who had a mid-air collision with the alien, who bonded with him to save his life, is not completely unknown. In fact other Japanese toku shows like Johnny Sokko And His Flying Robot (a redub of Giant Robo) and Spectreman are pretty well known to people who lived in the 1960s and liked these kinds of shows. Granted, there would be mostly young people from 2020 watching that trailer, but it doesn’t end there.

It took a really long time to get this on TV versus when it hit Japan, but Ultra 7 was a staple on TBS for a while in the 1990s. The Ultra in this series takes on a human form to honor a man who died trying to save someone else. He then joined UG, one of 20 different anti-giant monster groups in this franchise if most of it is supposed to be in the same universe. Kids saw this one too.

This one may have only been released on 80s home video, during the “Japanimation” period, but this is as full a history as I’m aware. While a few anime versions of the M-78 champions have been created this is the only one I know of with a US dub, before that (thanks to a bit of research) airing on WWOR channel 9 in New York as part of a series called Japan Tonight. The two dubs aren’t really connected according to said research, which is odd given that it comes from the same show. 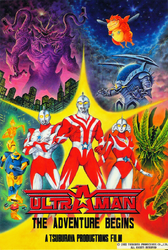 One of two American-produced Ultra series and the only one that made it to US television (see the Saturday Night Showcase on Ultraman: The Ultimate Hero for more information), this was also animated, but produced with Hanna-Barbera. I plan to do a video review on this…and about a few dozen other things…in the future but what you need to know is that it takes a few liberties but ones other incarnations have ever done. And “Ultraman USA” is canon in Japan, with suits created based on the three Ultras in the show. I wish more people knew about this. We had it as a made-for-TV movie but I heard some markets had it as a miniseries. Too bad we never got a full series.

Ultraman: Towards The Future

I chose the box art for the last one because I couldn’t just find the intro. I chose the comic cover for this and the next one to note that the comic exists. This series was live-action but was created in co-operation with the South Australian Film Corporation. They even get their own anti-monster group, UMA. For anyone in my generation who missed The Adventure Begins this was their first introduction to Ultraman. It got a comic a while later in the US, produced by Harvey and later moved to their “Nemesis” imprint. For whatever reason they opted to replace Jack Shindo with another character, and apparently didn’t know what series they were on, as according to the Ultraman wiki they kept getting confused with the original series and lost Ultimate Hero series. This also had toys on store shelves and a video game so it’s not like this version is all that obscure.

Okay, the comic came from Korea but it was translated by Dark Horse, which means it was easy to find in US comic stores. Also the art is amazing. However, it was the Fox Box translation of the series that brought this to American audiences and the last one to air on regular US television. The translation differences are surprisingly minor, a few added jokes and a different intro. I liked it and it has been brought up a few times on this site. But seriously you need to at least look at this comic for the artwork, though the stories are also good. A bit darker in tone than show in either language but not horribly so and rarely that graphic.

Additionally a few movies have been released on DVD and Viz Media translated a few manga stories but you have to be in the right circles to care. Netflix has produced their own Ultraman sequel though with a few modifications from what I can tell. And other classic Ultra series and even knew ones are not hard to come across online, some of them even legally licensed subtitles and dubs. So I think a bunch of Ultra-fans wanted to show off how smart they are and “school the noobs” on Ultraman. He may not be as big here as he is in Japan but it’s not like he’s completely unknown. Get over yourselves, folks! You ain’t all that and nobody really cares. I just hope Marvel doesn’t give us a crap take on the franchise. I’m not taking bets on it though.