Superman, Deku, And The Relevancy Of Heroism

Modern writers in the superhero genre seem to have abandoned the idea of superheroes. Some prefer to darken heroes, make them more into anti-heroes while others have outright stated they’d rather write villains. They tell us the villains are more complex and the traditional “tried and true crusader of justice” is “cookie-cutter” and outdated. Bullcrap! You want to watch the news right now and tell me that the heroic hero is no longer in style, but I say that’s part of the problem. The traditional superhero has been abandoned by the writers but has it been abandoned by the fans? Is Superman, the embodiment of what modern writers tell us is everything outmoded about superheroes, relevant today? He darn well better be.

This is a long video from YouTube essayist Literature Devil but it’s well worth watching. So grab a seat, put your phone or tablet on a stand if you aren’t using a computer, and let him explain why superheroes like Superman and My Hero Academia‘s Izuku “Deku” Midoriya are exactly the heroes modern mythology and the superhero genre need as they not only define what a superhero is, but show how complex they really are as they follow the hero’s journey. It’s not the superpowers that make them superheroes. Remember, villains can has superpowers as well. That’s why they’re called supervillains. So what makes a superhero the hero? Get ready to get philosophical.

Personally I think the Flash SHOULD be the faster hero. Superman doesn’t need to be the best at everything. Having multiple powers allows him to have a more well-rounded set rather than having to be a master of all of them over everyone else. Among the Bat-Family Batman is well-rounded but each of the other members excel at one specific talent, the one in my head that Tim Drake may be a better detective than Batman, another stealthier, etc. What makes Batman great is that he has learned all of them while his team has mastered one or two, giving Batman an edge that way.

Literature Devil also highlights why Zach Snyder was good for Watchmen but bad for the regular DC Universe. He believes in Alan Moore’s unheroic take on superheroes, maybe even more than Moore himself. He doesn’t believe in heroes or in the potential goodness of others. Apparently he hasn’t seen us race to help each other after natural disasters. He didn’t work in a Connecticut grocery store seeing people getting food and water for the people of New York after 9/11 like I did. And the news rarely mentions the day-to-day things we do to help each other, like helping with groceries to the car if we see someone overloaded (or during the pandemic’s heights where those less susceptible to the coronavirus went shopping for those at high risk) or even holding a door open for someone rather than let the door hit them in the face. He only sees the worst of humanity and not the best…which makes him absolutely wrong for Superman, someone who pushes us to be our best even without near-godlike powers, or Batman, who wants to keep what happened to him from happening to someone else out of love of his city and its innocent citizens. He doesn’t believe in it so he can’t make that movie.

As far as villains becoming more complex…that’s on you writers. You were the ones who found “villains for villains sake” to be empty and boring and sought to make them more complex. Now you think the only way to make heroes more complex is to make them villains who just happen to save someone now and then? Or they can only come from tragedy like Batman and can’t be inspired by others to do good, even if it means being better than our fallen heroes to be the people they failed to be? That’s still on you. 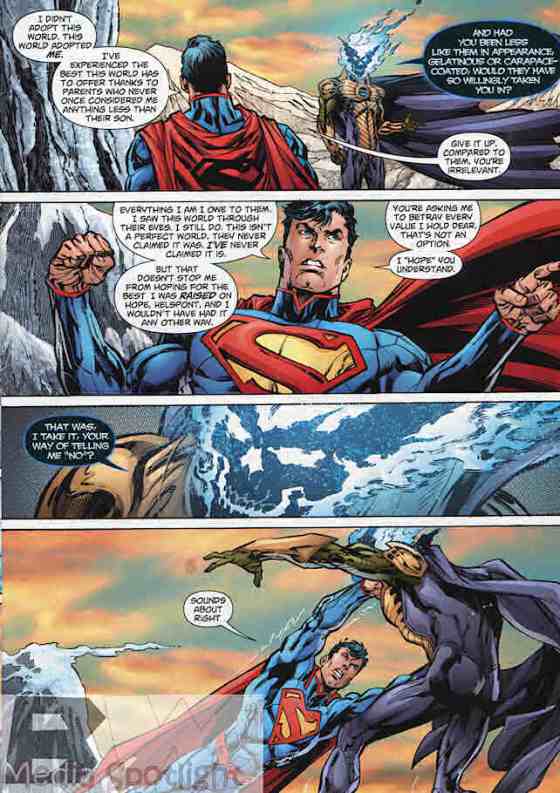 If Superman’s message of being good, heroic, virtuous, and helping others is a lie then I want to live in that lie…not that I want to live a lie, because that way lies foolishness. Instead I want Superman’s alleged lie to become our truth. I want people to be better. I want to come together and openly work to make the world a better place, to debate perspectives out of love for humanity rather than hatred for those who disagree with us. Superman is the person we aspire to be not because of his powers. Bizarro has his powers. The Plutonian has his powers. Homelander has his powers. That kid from Brightburn and Uma Thurman’s powers in My Super Ex-Girlfriend has his powers. These were not good people and if someone in the real world obtained these powers–which is not only medically impossible but violates certain laws of physics–do you want someone like them to have them? Or do you want someone like Clark Kent, a man who seeks the good in others and to nurture that goodness, to want to save the human race without controlling them or making us do what he wants because he sees us as sheep to be led but to be a light shining in darkness, to show by example rather than force, and to just be what a man, super or otherwise, should be?

Sometimes we need to be better than our heroes. We’ve seen that in celebrity failings the past few years whether in sports, politics, movies, or even YouTube. Superman is a character we don’t have to be better than, because he believes what he says, and yes those heroes still exist in the real world. If Superman is irrelevant in this modern age then I want nothing to do with this modern age because we have officially failed as the human race. That’s why I still believe in heroes, because I’ve seen the shadows and the light. I’m not naive enough to ignore the evil but I’m also not foolish enough to ignore the good. Humans can be better. If we couldn’t, we would never have created heroes in the first place, in fiction or in life.