“Yesterday’s” Comic> The Deep: Here There Be Dragons #1 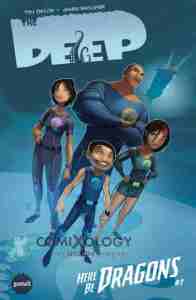 “The furniture movers are going to get here before bedtime, right?”

The Deep: Here Be Dragons #1

The inspiration for the animated series. The Nektons are a family of ocean explorers but a new mystery has come to their attention. A possible sea-going dragon, or at least some kind of monster. destroyed a fishing boat off the coast of Greenland and is scaring all the fist to the surface. Old maps and legends suggest this isn’t the first time the monster appeared, but when the youngest member, Antaeus, takes their underwater exo-suit to investigate what they think is the monster, they find an even bigger one coming to eat, and it swallows Antaeus and his pet fish Jeffrey.

What they got right: I tried watching an episode once but I think I chose the wrong one, where Ant (Antaeus’ nickname) and his big sister Fontaine taking care of a bunch of kids. Had I started with a story more like this I might have been more interested. (I think this was adapted into an episode or the creators, the writer and artist, adapted an episode into their comic series. Either way it’s a better story. You get a good introduction to the characters as the plot introduces itself.

What they got wrong: ComiXology’s “guided view” screwed up the reading order of captions on one page (it’s taken down but since I had it in the library I still have access as of this review) but otherwise no real complaints.

Recommendation: The story is starting out good, with two more issues of this miniseries. If you come across it then it might be worth checking out.

Posted by ShadowWing Tronix on October 10, 2020 in Yesterday's Comics and tagged Gestalt Comics, The Deep.