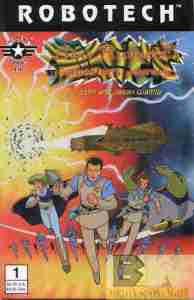 “I told you the oven was set too high!”

The Robotech Expeditionary Force sent a ship. Recon One (as noted in Robotech Masters), back to Earth to warn them the Robotech Masters were coming and about the Invid (and to further mess with Edwards’ plans). However on the way out the ship is caught in an energy web set up by the Invid to block anyone leaving the system. Taken to their station Major John Carpenter, Tirolian ambassador Trell, and the ship’s captain are taken for questioning and tortured when they refuse to cooperate. Taking advantage of the Regent’s order not to harm the crew the trio manage to escape and free their comrades. Then Carpenter and Trell go to destroy the station and the web with it. Trell forces an interface with the station’s organic computer brain and causes the self-destruct but is killed in the attempt. After a space burial the ship continues on to Earth, seen again in the episode “Outsiders”.

What they got right: While technically unnecessary it’s nice that Carpenter and the Recon One crew get to have their own adventure. The ambassador has to disappear since he wasn’t in the episode (though it does make sense why they would bring in a Tirolian ambassador no longer serving the Masters after they left them all behind) but he gets to go down saving the crew and allowing the others to exit the system later in the saga.

What they got wrong: The poor captain remains unnamed. Since the story is all action we don’t really get to know the characters very well. There’s a panel where Carpenter is speaking the lines of Invid commander, Voxel, and some missing punctuation near the end.

Recommendation: An enjoyable story worth giving a read.