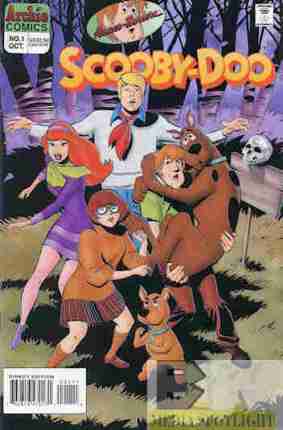 When the Scrappy era of Scooby-Doo returned to the classic mystery solving elements of the paranormal that was shoved into the chase-only seasons of Scooby-Doo And Scrappy-Doo didn’t disappear. In one episode the gang, now rejoined by Daphne, solved an old Doo family mystery that led to the spirit of one of his ancestors being reunited with her lost fiancé and their spirits finally put to rest. Later on, in one of the stories where Freddy and Velma occasionally came back the gang ran across actual monsters menaced by a supposed ghost witch. And in A Pup Named Scooby-Doo the gang had a real ghost as a client, and yet the kids still insisted there were no such things as ghosts. It wasn’t until The 13 Ghosts Of Scooby-Doo that the threat of actual demons were an issue, something that continued in various TV movies. However, even the most threatening of real spirits weren’t all that scary and there were plenty of goofballs among the real monsters.

That changed with Scooby-Doo On Zombie Island, the first in a series of direct-to-video movies that put the fake spirits right up there with the real ones, blurring the lines. The following video by NerdSync goes over how that movie changed the classic Scooby formula without tossing it out, but I don’t think he went far enough, and ignores the disappointing direction the video movies have gone in.

Movies that followed this series continued mixing real paranormal threats with fake ones. Scooby-Doo And The Witch’s Ghost dealt with a fake ghost but at the end they shoehorned in a real ghost witch to build off of what Zombie Island did. Scooby-Doo And The Alien Invaders brought in real aliens and is closer to Zombie Island in that the real aliens were actually the good guys. At some point however the video movies moved away from real monsters but not completely. Even in some of the later stories like Scooby-Doo And The Samurai Sword kept the magical alive alongside the villains in masks and high-tech gadgetry. I think this was to the franchise’s benefit. Although one of the comics I reviewed did note that even if the monster is fake it’s possible the villain isn’t above slashing a Scooby having actual monsters, ghosts, and aliens in Scooby’s world makes you wonder if the monster really is a supernatural threat. It makes sense then for Shaggy to believe the monsters are potentially real, but it kind of hurt Velma when some writers refused to let her believe in the supernatural, Scooby-Doo: Mystery Incorporated probably being the last version to have actual mystic stuff going on.

That’s what bothers me about the plot (I haven’t seen the actual movie) of Scooby-Doo: Curse Of The 13th Ghost and Return To Zombie Island. They went back to prove that the supernatural was fake all along. Now Mystery Incorporated takes place in another timeline (though the gang remember the old reality when the end of the show resets things) but these were movies that proved magic is potentially real, restoring the, for lack of any better term, mystery to the proceedings. Maybe this time the ghost is a real ghost, but could still be working with a living villain out for the same old kid-friendly crimes. Maybe the ghost is trying to clear his name, or the name of someone in their family or friends. There are new possibilities that are lost when they opt to retcon out the paranormal and put the franchise back to normal, and I think that’s a shame.

So hopefully somebody will either ignore those movies or restore the supernatural elements, because having the potential that this time the monster is real even if next time it’s back to being fake opens new possibilities and keeps the potential for having the formula fresh. Not only do they have to find out if the monster is real but who is behind it and why. There’s opportunity there and I don’t know why some of the current writers are trying to toss it out.