Another Second Chance For Scrappy-Doo 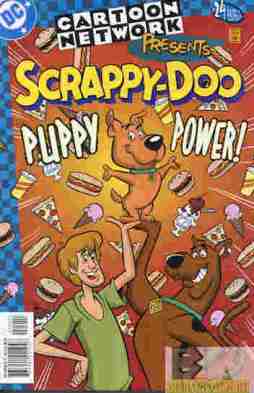 I know, I already posted a video recently defending Scrappy, did an Art Soundoff this year defending Scrappy, and make a Jake & Leon comic where Scrappy gets payback on James Gunn for writing him as the villain in that terrible live-action movie. However, Scrappy is becoming Superman for me in that when I see a video defending him from the dark and gritty attackers I have to promote that sucker. Scrappy-Doo wasn’t the problem with the direction the franchise took, and in fact may have been the reason the franchise lived as long as it has.

This time the defense comes from YouTube channel Second Chance. In this episode from July he takes an analytical look at the history of Scrappy-Doo, the evolution of the franchise, and the rise of Scrappy hate that affected not only the internet but Cartoon Network itself. Also, I learned a few things that I hadn’t before.

Slightly off-topic but since he brought it up the idea that Kelly Marie Tran was bullied off of social media because of role as Rose Tico is actually up for debate as a number of Star Wars fans question the assertion. That said, it is wrong for Tran and Daisy Ridley to get flack for their characters when the problem was with the screenwriter. As characters they were good concepts poorly executed.

The host brings up other characters supposedly inspired by Scrappy’s existence. Yeah, maybe Zach the fifth “Turtle” from the original Ninja Turtles cartoon, one of those mascot characters even I can’t defend, but Ms. Lion from Spider-Man & His Amazing Friends may have more to do with Dennis Marks, who liked stuffing a dog character into his shows, as mentioned in that video on The Mysterians, the show that almost preceded The Transformers. So it’s not fair to blame Scrappy for that. Speaking of Transformers though, the same hate was leveled against Daniel Witwicky, with fanfics taking great pleasure in his constant demise…and I remind you this is a (granted fictional) 12-year-old boy we’re talking about. And of course longtime readers know my defense of Snarf, but so far I haven’t stumbled upon any videos defending him.

In the comments someone mentioned that if Be Cool, Scooby-Doo had gotten a third season they were hoping to redeem Scrappy, which I would have loved to have seen. Instead we got Scooby-Doo & Guess Who, which did the same kind of comedic deconstruction of the franchise tropes but instead of building up interesting characters we got celebrities and DC superheroes acting silly. I feel cheated. Also noted here and in another video is that the creators of Curse Of The 13th Ghost would have had Scrappy but the producers nixed the idea and as it was they had to fight for Flim-Flam. (Yeah, count me among those who don’t like Flim-Flam. I though the criminal reveal in Mystery Incorporated was a bit much but for the same reason as the Scrappy hate. Someone liked the character and it’s just another hate attack on a character they could either improve or ignore.) Apparently the producers wanted to also keep the paranormal elements vague to not upset fans who hate the real paranormal, but whatever problem I’ve had with The 13 Ghosts Of Scooby-Doo I actually like that they made it so both real and fake ghosts could exist as a way to refresh the franchise. I mentioned that in that video about Zombie Island I posted recently.

I wish people would go back and give Scrappy a second chance. It may not lead to them liking the character but maybe it would cut down the loathing. I wish that comic the video mentioned had led to a redemption, or Be Cool getting a chance to redeem him would have worked as well. At it is, if the current creators hate him so much, just stop talking about him so the rest of us who like Scrappy can stop watching him get further dragged through the mud!

Posted by ShadowWing Tronix on November 12, 2020 in Animation Spotlight, Television Spotlight and tagged In Defense Of..., Scooby-Doo, Scrappy-Doo.