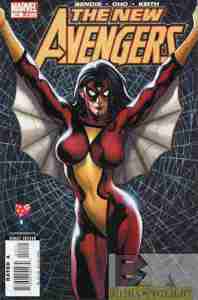 “Yes, I AM Spider-Woman, but Spider-MAN doesn’t have this much webbing in his room so why do I?”

Confronted by Captain America about Madame Hydra’s escape Spider-Woman goes over recent events. Having lost her powers she was approached by a Hydra agent who offered to restore her powers if she would be their mole in SHIELD. Jessica told Fury and decided to use her as a triple agent until his (retconned) past caught up with him and he went underground. As one of Fury’s people her job description was seriously reduced until she was drawn in as an Avenger, meaning she was now really useful to Hydra. Unbeknownst to Jessica the other Avengers were listening in and believe her. Unbeknownst to the Avengers Nick Fury was listening in and thinks he’ll be working with them to expose whomever is behind corrupting both SHIELD and Hydra but the Sentry’s Watchtower is now available for everyone to see and people are talking. It’s time for the new Avengers to make their official debut.

What they got right: On the technical side the story isn’t bad. Jessica’s path to the current situation works well enough, I like that the Avengers immediately believe her instead of bogging the future events down with distrust, and Spidey’s quips aren’t as annoying because he’s barely in this issue. It just emphasizes how Fury has messed with them.

What they got wrong: I actually don’t know how much of this is blamed on Bendis so bear with me, but it’s the events themselves that I have issue with. Why have Jessica lose her Spider-Woman powers? I’ve only read one issue of her comic but it didn’t show Jessica going from Hydra right to SHIELD. That could just be what little I know. It doesn’t feel like Jessica is getting a good showing here. Of course we get a scene with Jessica naked on the operating table (with the goods blocked from our view of course) which wouldn’t be the last time that happened. However the biggest problem on the art side is the last panel just uses most of the panel just above it and it is so very obvious. It’s also not the first time in this series or this issue where reused panels are obvious.

Recommendation: I still can’t really recommend this run. This issue isn’t too bad but if it isn’t responsible for bad alterations to Jessica Drew, the original Spider-Woman, I don’t feel like it really fixed them.