Chapter By Chapter> BattleTech: I Am Jade Falcon chapter 8 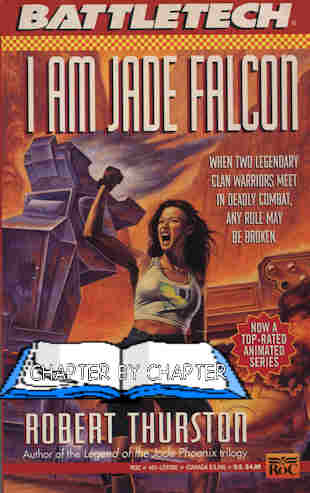 In our last visit to the Falcons our heroine was demoted and given a terrible assignment, which just happened to coincide with the punk kid superior officer not getting his skidplate kissed by her. Today’s chapter will actually take us away from Sudeten to a new location. It’s actually very short, only 5 pages, but I’m also short on time today so that works out. Let’s meet some new players in this story.

It is here that we meet Star Colonel Kael Pershaw and his aide Star Commander Deval Huddock, and through them learn more about Jade Falcon life. Pershaw is actually a well known character in the BattleTech franchise, according to the fan wiki. At this point in time he is the Loremaster and leader of the Falcon’s Watch. In the Clans the Watch is their intelligence gathering arm, but they tend to avoid covert operations as something unseemly. However, the Wolf Clan is more willing to pull off such operations and Pershaw and Huddock (more on him in a moment) have intel suggesting that they have spies in the Falcon clan, either pretending to be a young freeborn warrior or an experienced warrior among the solahma units (basically where they stick all the old warriors who technically can still fight). Though the Jade Falcon Watch doesn’t usually do the undercover operative game, these spies need ferreting out and Pershaw knows at least one bitter, short-tempered warrior for the job. I wonder who he means?

So what do we learn this issue. I looked up solahma for confirmation but you can get from inference what they’re about. Then there’s the history of the two men in this story. Pershaw (I admit I used the name to look up “pshaw”, defined by Merriam-Webster as “used to express irritation, disapproval, contempt, or disbelief“, to see if there was some word play going on) is described as having an eye patch while his one good eye is losing its sight. Apparently they do regard his mind well enough to give him this role given how the Clans feel about non-warriors but at least smart enough to realize the importance of military intelligence. I don’t know how big a role he’s going to play but at least this will most likely lead to something better for Joanna no matter what Ravill had planned.

Huddock I couldn’t find any information of. The best I could do was look up other characters in the franchise with that bloodname. The BattleTech fan wiki lists him on that page only without a profile of his own, but for some reason it says he has no known rank. It says in this book at least that he’s a Star Commander, but this book doesn’t have a full profile and the events are a minor note in Pershaw’s profile so apparently the editors haven’t actually read the book yet. The man is rather diplomatic in his approach and doesn’t seem to latch on to sarcasm. I don’t know what further role they’ll play once Joanna has her new orders but it should be interesting to see.

Next time we go back to see how Joanna is preparing for the assignment she thinks she’s headed for. Won’t she be surprised…but will it be a pleasant surprise? Time will tell.