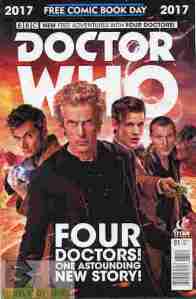 “How many Sonic Screwdrivers does it take to screw in a light bulb? That’s not a joke, that me telling you to stop being lazy!”

Titan Comics (June, 2017; reviewed during that year’s FCBD haul, this re-review as posted to comiXology)

The 12th Doctor and Bill head to a world the Time Lord has been to more than once. During his ninth incarnation the Doctor visited his friend Plex, the last of his species though the Doctor had tried to save them. Plex showed him a cloning experiment based on his own cells, but as the 10th Doctor learned that Plex died and the people were too similar to him, breeding stagnation, so Plex’s final wish was for the people to forget about him. This backfired when the 11th stopped by and the people were at war, so the Doctor used a modified biodata module (you know, that fob watch the Doctor and the Master used during Martha Jones’ time as a Companion) to restore Plex to one of them. However, when 12 and Bill showed up they were at war again and the module powerless, so the Doctor had to convince them himself.

What they got right: Conceptually the story is good and for the most part it’s decent. 12th’s tale to Bill is a framing device to give all the New Who Doctors up to that point a chance to take part and on that count the story works well. The Doctor is the Doctor, including the New Who brand of silliness.

What they got wrong: 12 is the only one to keep one of his actual show Companions, and all she does is complain a lot. Meanwhile 9 doesn’t get a Companion at all and both 10 and 11 have Companions unique to the comics, none of which even factor into the story beyond someone to explain stuff to and be confused with the Doctor’s silly antics. Why is Bill the only show Companion in the story and who are these four others? (And why are all of them female, two for each? The Doctor has had male Companions as well. One of the FCBD stories even has Abslom Daak as one of the Companions, a holdover from the classic Marvel magazine strips.)

Recommendation: Overall it’s a good story and still free online, but not a bad addition to your physical comics if you find it at a good price. Especially free since it was a free comic originally.