You can already find reviews of issues #1-6 that I did during Today’s Comic, when they came out. 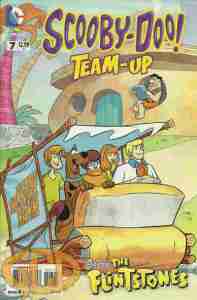 Wait until Shaggy and Scooby see the food portions in this period.

DC Comics (January, 2015; as posted to comiXology in the volume 2 collection)

“Scooby-Doo, When Are You?”

A scientist in Bedrock creates a time machine that draws the gang to their time period. Stuck in the past they stay at the Flintstones’ residence where they learn about a phantom haunting an opera. The gang, the Flintstones, and the Rubbles come across the phantom but manage to easily stop him. Learning it will be at least three or four years before the scientist can send them home Fred and Barney call on the Great Gazoo to send them back to their own time, only he overshoots and they end up on the dog walker treadmill of the Jetsons.

What they got right: If you wanted to see a lot of Flintstones references this is your comic. We see the big ribs, the various gadgets, a cameo by the Gruesomes (which the gang connect to that weird carny family, so they’re keeping to their own continuity), and I’m guessing the Frankenstones would have been mentioned if they had time, and they even make a joke around the Pebbles Cereal ads where Barney used to trick Fred out of his cereal. Plus they acknowledge the two Freds without overdoing it. They also come up with an explanation why the gang can see Gazoo when usually only Fred and Barney can.

What they got wrong: If you were looking for a Scooby-Doo story instead of a Flintstones story the gang pop up in, this isn’t it. Guess who STILL isn’t getting his solvable mystery story! The villain is mentioned but nothing ties him to the “phantom”. There’s a red herring about whether or not it was Fred trying to ruin things to get out of going to the opera so he and Barney can go bowling. (Why can’t the girls go to the opera without the boys and have a girls night out? Certainly they can find something they all enjoy for a full friends hangout another day.) Half the comic is just the gang reacting to the history incongruities of Bedrock, although it is amusing that this is the history of the Hanna-Barbera universe. Still, I have a feeling some of the digital-first buyers, given that this series splits the full print version into to smaller versions, the reason I snagged the collected volumes during the promotional event, felt a bit jipped in part one.

Recommendation: I know this series CAN have good mysteries, unless my memory is that wrong since I haven’t read the six issues I own physically in some time. Still, as a Flintstones story about the strange time travelers it works well enough if you’re okay with that.