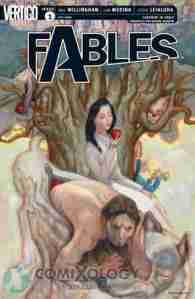 What’s she putting in her garden?

You know all those characters in fairy tales? Well, they’re real, nearly immortal, and secretly living in New York after being chased out of their homelands by the “Adversary”. The fable community hides as best they can in Fabletown and around New York City but they don’t have a lot of money. That includes a penniless Prince Charming, who is willing to use his talents to charm a waitress to pay his bill and sleep with him. He and Snow White are divorced after some incident with the Dwarves I probably don’t want to know about. Snow White is now the deputy mayor of Fabletown but her sister, Rose Red, demonstrates that “nearly” part when she’s murdered. The Big Bad Wolf, now taking on the human identity Bigby Wolf and serving as the detective for Fabletown, investigates after Rose’s boyfriend Jack (yes, the beanstalk kid) reports the murder with Snow White forcing him to take her along, but after looking around Rose Red’s apartment, and the words “Happily Ever After is over” on the walls, he decides to arrest Jack.

What they got right: With only one piece of obvious exposition (which Snow White calls Wolf out on because of course she knows who her sister is) everything we need to know is told through dialog and a little bit of caption box narration. There are some good worldbuilding moments, like when Beauty and the Beast need marriage counseling as Beast’s curse tries to come back, and establishing which fairy tale characters are involved thus far. I also really like the art.

Other notes: Let’s be honest, this isn’t my kind of comic. Conceptually I think it’s brilliant and I only picked it up on comiXology because it was on sale for free at the time (or maybe I had some promo money, I don’t remember) and I wanted to see what all the praise this series gets was about. Admittedly it doesn’t disappoint, but bloody crime scenes, watching Prince Charming’s pillow talk, and some of the darker takes (granted most of these original fables and fairy tales were pretty dark themselves before more recent sanitizing–and it’s not just Disney that does it) just isn’t what I’m personally looking for in a story.

Recommendation: Based on the first issue however, with those warnings in place (it does say “mature readers” on the cover and it is a Vertigo comic), it is a comic that may have earned it’s high praise in comic circles. It’s at least worth checking out to see if it’s for you.