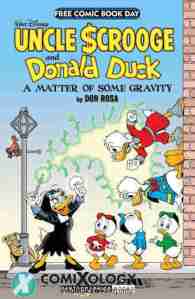 Magica knows how to drive Scrooge up a wall.

Fantagraphics (May, 2014, as posted to comiXology)

In the first story Magica De Spell uses a gravity-altering spell on Scrooge and Donald to steal his #1 dime. With help from the nephews they manage to give Magica a test of her own medicine and save the dime. This is a fun story but if you only know these characters from the new Ducktales you may be confused. The new show borrows from the look of the series but the original show was closer in characterization. Overall a fun story though some panels are harder to read when reading them on a computer monitor like I was. (It’s also annoying that guided view doesn’t zoom in on text like the article at the end of the book by Rosa himself.)

In our second story it’s Gladstone Gander’s birthday, but thanks to a trick Donald pulled on him as kids it’s the one time of the year where his overactive good luck goes bad. Daisy wants to throw him a birthday party and this year all his attempts to avoid it just sends him back to the farm…and unfortunately for Donald a cure. I understand why Donald has an issue with Gladstone’s good luck gone wild given the attitude it gives Gladstone since he rarely has to work for it, so it’s kind of a shame he loses his one moment to get a bit of humility but at the same time Donald deserves payback for his dirty trick. It’s a fun story.

I’m not sure which is cheaper or easier to find, this Free Comic Book Day comic in limited supply or finding the actual issues it comes from. Rosa does have an article at the end explaining his history with the comic and about the stories but that’s the only benefit. That should help you decide which to get.