Look what I found in the wrong spot in my comic collection. Turns out I had this issue after all. 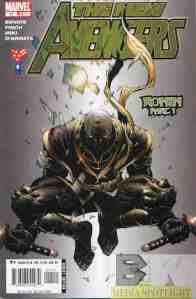 Glass companies in superhero universes must be rich by now.

The cover claims the title is “Ronin” part one but I don’t remember the other two using it nor does the story actually have a name in the comic. I’m guessing #s 12 and 13 are the other two parts.

In present day a shadowy figure sneaks into Silver Samurai’s compound, finding him and Madame Hydra apparently a couple. In the past Steve goes to Matt Murdock to find out why the Hand might want to break out Silver Samurai and bring him to Japan. Matt suggests it’s because a lot of criminal empires are in a mess currently due to various events in other titles and they’re hoping to use him to get the Yakuza under a solid foundation. He still insists bringing Daredevil along would hurt the Avengers in the long run and suggests someone else, the person in the shadowy costume. Said person returns to the hotel room the Avengers are staying at and warns them that Hydra is also involved and apologizing because they followed her.

What they got right: Stuff that happens in the daytime or at least enough lighting that I could follow even in the stealth portions. That’s something the next two issues will be missing. It works okay as story set-up.

What they got wrong: But going back and forth between present and past gets annoying after a while. Bendis occasionally has an issue with linear time. Start in the present, STAY in the flashback at least through Steve and Matt’s full conversation, maybe jump present for a moment and then the scene with Steve talking to “Ronin” when she’s just barely on panel for the surprise reveal that didn’t work in #13, then stay in the present and that might work, or at least be less annoying. The cluttered fights I complained about in the other two issues only show up near the end while Ronin’s initial infiltration was done a lot better.

Recommendation: Going back through the other two issues’ reviews I found I couldn’t recommend them and this issue really isn’t any different. The fight scenes slowly decline to what we saw in those issues while the bouncing around time thing just doesn’t work. I still can’t recommend any of Bendis’ run on this series. Too many of his problems show up here.