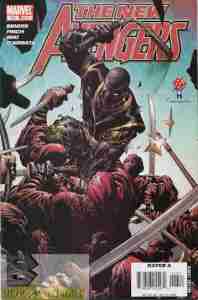 The Masked Singer is rough this season.

Silver Samurai turns on the Hand and Hydra, not falling for their lines, but that doesn’t mean he isn’t happy about his kidnapping. While Captain America tries to assure him that the kidnapping was the act of a rouge group of SHIELD operatives he still publicly blames the US government, believe that being public will allow him to escape being captured again. During the trip back home Madame Hydra manages to escape. Once home, Ronin is revealed to be a woman named Echo, who wants to return to Japan to keep an eye on Silver Samurai and Hydra. The next day Cap confronts Spider-Woman, because he knows she helped Viper escape!

What they got right: It may take Bendis forever but he’s finally going somewhere with the corrupt faction plot. I do like MJ waiting for Peter, who doesn’t make as many dumb quips but that’s because he doesn’t say a lot this issue. He also points out that the Sentry could have wrapped this up quickly but Cap does try to give us an explanation for his not being there…he’s not ready to go back to full superhero mode.

What they got wrong: Who the heck is Echo? Is she deaf, explaining why she doesn’t know when the masked heroes are talking? Sure I could look her up but that’s not the point. All this story tells me is that she can fight, shares Taskmaster’s ability to repeat what he sees others do, and has a huge handprint-sized burn on her face. Also, lampshading how many people have seen Spidey unmasked since this comic began only reminds us of that dumb decision.

Recommendation: Tame compare to the previous issues but I still can’t call it good. Maybe stop doing everything at night with everyone all cluttered together? That would be a start but not enough to gain a positive recommendation from me.