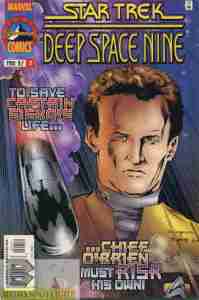 Not in this issue: O’Brien slowly turns into a Talosian.

O’Brien enters the time/space distortion but while he doesn’t find the Shrin probe he does find evidence that it may still be in there. Of course Koth still refuses to believe it, and Mayev suspects it’s because the project is competing with so many other projects that blaming Sisko is the only way to maintain his funding. Mayev offers to help but he actually wants to use Defiant‘s destruction to show his people that their obsession with science has become dangerous. They stop him, rescue the pilot, and finally get Koth to see something resembling reason, clearing Sisko.

What they got right: There’s a lot of talk about “follow the science” as I write this, but the problem usually comes down to how the science is approached being the actual source of the debate. Scientists fighting for funding, results based on biased examination, that sort of thing. This story demonstrates that well without being all preachy and heavy-handed. You can at least agree that the Shrin have gone overboard and lost their souls as a result, nearly dooming the pilot and blaming an innocent person for her death. It’s a good story with good characters, what classic Star Trek used to get right.

What they got wrong: Mayev’s heel turn comes almost out of nowhere. He’s using them to expose Koth’s mistakes in pushing ahead on the project but is still willing to kill innocent people, be it the pilot of the Defiant crew, to achieve his end but it feels more like a last-minute obstacle saying that you can’t trust anybody here. We never get to see the pilot or her probe. The credits are a bit garbled and I had to go to the Grand Comics Database to organize the mess. The log captions are in text that appears to be smaller than the regular dialog and they’re harder to read than normal. It’s not the fault of the LCARS style design. A lot of comics use that to indicate log entries; mimicking the desktop used in 24th century Trek shows is actually a nice addition. I just want to be able to read it better.

Recommendation: A good two-part DS9 story worth looking into.