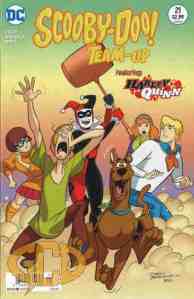 I’d make a joke about why Harley is chasing them with a mallet, but it’s Harley Quinn. I don’t think she need a reason.

It’s Christmas and a trio of ghosts are haunting a local store. Unfortunately for the gang Harley Quinn shows up…to join the team. As they try to solve the mystery AND keep her under control, the Joker shows up because Harley took something that he needs for his latest scheme. Something finally goes there way when Batman, Robin, and Batgirl show up, and Harley manages to scope the clue that points to the fake ghost.

What they got right: I was actually worried that this was going to be the gang helping Harley and Ivy deal with a ghost, which would have just been a bit too silly. I’ve already given up on ANY of the DC Scooby comics being decent mysteries we get to solve and this series in particular is just Mystery Inc showing up in other characters’ stories at this point, so at least the idea of Harley wanting to join in on the mystery was fun. We also learn Joker doesn’t recognize them because he’s terrorized so many people they don’t register even though between The New Scooby-Doo Movies and this comic they’ve defeated him before. (Brave & The Bold would come later and I’m not sure if that was a real story or something Bat-Mite made up.) They also remembered Harleen Quinzel is a psychologist and somewhere in the Harley Quinn mind she’s still active.

What they got wrong: The supposed ghosts of Christmas past, present, and future seem to be the same costume in different colors, a cheap version of the ghost disguises Creeps and Crawls used in that one Scooby-Doo story. If the ghost really was one of the people who worked there, why would he come back to continue scaring people if he was one of the people who had just run out scared from Harley?

Recommendation: You don’t pick up this series (or any of the DC Scooby comics really) for the mystery, you do it for the fun of seeing the gang interact with DC and HB stars and this one fits the bill. Give a read for that.