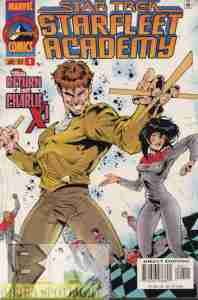 Critics agreed doing an all-marionette version of Pinocchio kind of missed the point.

Omega Squadron’s latest mission is investigating a stowaway found on the Eldurado. When arrive the ship is heavily damaged and only the stowaway is left. Ensign Li, in charge of the mission, learns that the stowaway is the same Charlie Evans from the TOS episode “Charlie X” but is stopped from warning the crew. However, she does manage to get Edam the information he needs. When the Squadron’s runabout experiences the same problems as the Eldurado, Charlie sends everyone to his personal pocket dimension, where T’Prell learns that Charlie created a second personality slightly out of phase and its playing havoc on his powers. Gaining control long enough to send everyone back to the regular universe on a safe planet, Charlie’s fate is unknown. Meanwhile, the aliens that have been showing up in the Paramount Star Trek comics as interludes are finally revealed to be the Jem’Hadar as they reach their destination…Talos IV!

What they got right: Evan is still recovering from mentally battling the Founder in the previous issue. T’Prell’s story and the foreshadowing of what’s coming later actually serves the story and helps her realize Charlie’s situation. I think the comic is trying to redeem Mr. Evans by having him mature to a point (as opposed to the fanmovie Of Gods & Men by Tim “Tuvok” Russ, where he goes the other direction).

What they got wrong: Is Ensign Li going to be their new instructor? Because I already don’t like her and it’s not like Edam has won me over yet. I don’t want to end up not liking everyone on this team.

What I think overall: It’s a good story to build to the Telepathy War arc and Charlie gets a little growth (or at least as much as they could fit). It’s nice to know he’s a better man than he was the teen that stalked Yeoman Rand. Worth looking into.